Whomever or Whoever: Get It Right Every Time With This Simple Trick 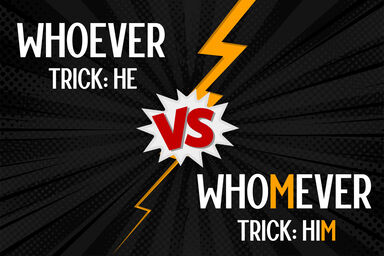 Whoever vs Whomever comparison
Advertisement

When to Use Whoever vs. Whomever

Both him and whomever are object pronouns and have M’s in them. If you can replace the word whomever with him, you’ve used it correctly. If you need to use he (a subject pronoun) to make the sentence correct, you should use whoever.

For example: Whoever/whomever owns the black Lexus needs to move it.

Which choice sounds correct? He is a subject pronoun and does not have an M. In this case you would use whoever. Thus, the correct sentence would read: Whoever owns the black Lexus needs to move it.

Another example: You can invite whoever/whomever you want to the concert.

You is the subject pronoun of the sentence, making the person to be invited to the concert the object. Because him sounds correct as the object, choose whomever as the other pronoun with an M: You can invite whomever you want to the concert.

Examples of Whoever in a Sentence

Whoever joins pronouns like I, we, he, she, and they to perform the action in the sentence when you don’t know who the subject is. It takes on several different uses, depending on the purpose of the sentence. Here are some examples of how to use whoever in a sentence.

Whoever is typically the first word in the sentence. However, like all subjects, it only needs to come before the sentence’s verb. Sentences with whoever always contain a dependent clause.

Examples of Whomever in a Sentence

Object pronouns like whomever include me, us, him, her, and them. They are receiving the action in the sentence. But, when should you use whomever in a sentence? Check out these examples to understand the difference.

Keep in mind that while these instances do precede verbs, they are not the active verbs in the sentence. In most cases, the subject is also performing the verb that follows whomever.

Whoever and Whomever in Questions

Unlike whoever and whomever, who and whom can function as interrogative pronouns. They ask questions to learn someone’s identity. Some examples include:

Changing who and whom to whoever and whomever change these questions to noun phrases, which need another clause to become a full sentence. For example:

The noun phrases become the subjects of the sentence, which then perform the verbs “buy,” “needs,” and “depends.” While it is not impossible to use whoever and whomever in a question, it can result in awkward phrasing. Rewriting the sentence is a good way around it.

All four pronouns indicate that the speaker does not know the identity of the subject or object of a sentence. Who and whom function to determine a specific person’s identity, while sentences with whoever and whomever put more emphasis on the verb and less focus on the person’s identity.

The first sentence emphasizes that Alice knows the identity of a person who pulled a fire alarm. Using whoever in the second sentence creates the noun phrase “whoever pulled the fire alarm,” putting more focus on Alice’s relationship with this person. The difference is subtle but necessary for proper grammar usage.

Clear up your other grammar questions with more informational articles. You can determine the subject of a sentence with helpful examples of the three types of subjects. A rundown of the parts of a sentence can remind you about sentence construction and the importance of varying your sentence styles.