“Lasagna” vs. “Lasagne”: Which Is Correct?

The world is full of great pastabilities, and lasagna is just one of them. That incredible layered dish of pasta and melted cheese is one of the most beautiful things that you could pull out of the oven. Some confusion comes when you try to figure out the spelling, even beyond that silent “g.” Is it spelled lasagna or lasagne? In short, either! But it depends on where you are and what you’re referring to. 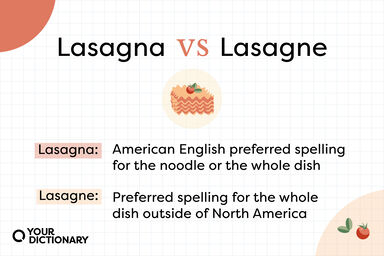 Definitions of "lasagna" and "lasagne" that are detailed in the article.
Advertisement

Which Is Correct: “Lasagna” or “Lasagne”?

Both lasagna and lasagne are correct spellings, but their proper usage can vary based on a few factors. First, there are regional differences. Lasagna is the American English form of the word, but once you get outside of North America, lasagne becomes the norm.

Using “Lasagna” or “Lasagne” When Talking About the Dish

Beyond regional differences, you also have to think about usage here. Both lasagna and lasagne can refer to the actual dish consisting of the noodles, cheese, tomato sauce, meat, and other variations in filling.

Using “Lasagna” or “Lasagne” When Talking About the Noodle

However, the words also refer to the type of wide, flat pasta noodles used in the dish. In Italian, lasagna is the singular form of the noun, referring to a single flat sheet of the pasta, while lasagne is the plural form and thus the go-to word for the whole dish, which is made up of many sheets of pasta.

How Do You Pronounce “Lasagna” and “Lasagne”?

Part of why we don’t really write lasagne in the U.S. might also come down to pronunciation. In American English, both lasagna and lasagne are pronounced the same (luh-zahn-yuh). That can make differentiating between the two difficult in speech.

By comparison, Italians would pronounce lasagne closer to “luh-ZAHN-yay,” while the singular lasagna is pronounced “luh-ZAHN-yah.”

What Is the Plural Form of “Lasagna”?

In American English, lasagna follows the general rule for plural nouns: Just add an “s” to the end of it. That gives you lasagnas. However, that can sound weird to a lot of people, which is why some people use a plural count noun: of lasagna.

Strangely, we follow the Italian rules for most other foods. We use the plural form spaghetti instead of the singular spaghetto. We refer to ravioli (the plural) instead of raviolo (the singular). And, if you asked for a panini instead of a panino in Italy, you’d get several of the pressed sandwiches.

Both lasagna and lasagne can be hard for anyone to spell because they include pronunciations that aren’t common in English, specifically the Italian "gn." Found in lasagna and gnocchi, the /gn/ is a nasal sound that more often ends up sounding like “nyuh.”

That pronunciation and the general grouping of consonants can lead to misspellings like:

That also just adds more confusion to the English language when you consider words like pregnant (preg-nent) and sign (sine) also have "gn" but are pronounced differently.

But as the great wordsmith of our time, Lil Wayne, once said, “Real G’s move in silence like lasagna.”

The Origins of the Dish: "Lasagna" and "Lasagne"

Lasagna, as we know it today, comes in near infinite variations with different fillings, cheeses, and preparations. The exact origins are hard to truly trace, but most theories suggest it started in Ancient Greece with laganon, which were sheets of dough cut into strips.

Today, lasagna is a trademark dish of Bologna as instituted by the Accademia Italiana della Cucina, an official organization that basically ensures you don’t mess up Italy’s culinary traditions.