Learnt vs. Learned: Quick Lesson on the Difference

Learn how to use learnt vs. learned in a sentence. Get a clear definition of these two words, their parts of speech and where each word is used. Find out why location matters when it comes to understanding learnt vs. learned. 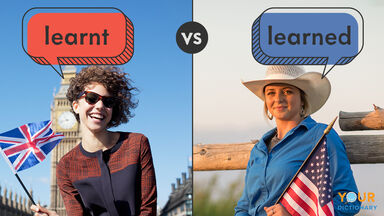 Exploring the Difference Between Learnt vs. Learned

English can get tricky sometimes. Why? Because there are lots of different variations of words you can use to mean the same thing. Learned vs. learnt is just that. The only difference between whether you should use learned vs. learnt is where you are from. Learned is the preferred spelling in American English, and learnt is the preferred word of a British speaker. But both are perfectly correct. Since there are a few other minor differences, check out these two words in more depth.

Since you know the basics of learnt, it’s time to look at it in more depth. The word learnt is a verb used as the past tense and past participle of the word learn. Learnt is used by British English speakers when they are trying to show that some type of information was learnt in the past. For example, "He learnt his ABCs when he was in kindergarten." Therefore, learnt is perfectly acceptable to use in the place of learned in a sentence when you are writing something in British English. Just remember, you need to stick to one form.

Learnt in a Sentence

Check out the word learnt in sentence examples to bring the word to life.

Like its best friend learnt, the verb learned is the past tense and past participle of learn. American English speakers prefer this version. However, learned also has another unique use. Learned can be used as an adjective to show a scholarly person or object. For example:

The pronunciation of learned as a verb and an adjective are also slightly different. As a verb, learned is said as one syllable (lernd), while as an adjective, it’s said with two (lern-ed).

Learned in a Sentence

Take a look at a few different examples of using the word learned as a verb and an adjective.

Since these words are so similar, having a quick table to reference can make your life a bit easier.

Learned vs. Learnt: It's a Matter of Location

The English language can vary based on where you live. Color and colour mean the same thing but are only used in specific parts of the world. The same is true about learned and learnt. These two words have the same meaning and usage, but it depends on whether you speak British or American English, whether you use learned or learnt. Ready to explore more English language variations based on location? Check out the difference between grey and gray.