Led vs. Lead: Stay on Top of the Difference

Are you led by someone or lead by someone? Does your pencil contain led or lead? To tell the difference between these deceptively similar terms, explore the different meanings and uses of led and lead. 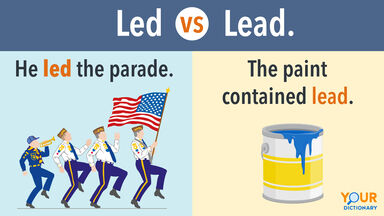 What’s the Difference Between Led and Lead?

Led and lead (pronounced lĕd) have several meanings. Some overlap, but others do not. Depending on whether lead is used as a noun or verb, the two terms may or may not sound the same. Most importantly, they are not interchangeable.

Meaning and Usage of Led

Additionally, when written in all capital letters LED is an acronym that refers to light-emitting diode.

Meaning and Usage of Lead

Lead is both a verb and a noun. Its verb form "to lead" does not rhyme with led. However, the noun lead does sound the same as led.

Examples Using Lead as a Verb

In its verb form, "to lead" means to set an example or to come first in a competition. The verb lead is pronounced LEED with a long "e." Lead can be used in the following contexts:

Examples Using Lead as a Noun

As a noun, lead (pronounced the same as led) is a chemical element. The core of a pencil is often referred to as lead even though it is actually made out of graphite.

The last sentence uses both forms of lead. Even though they look the same, they are not pronounced the same way and do not have the same meaning. The first use of lead is an adjective, but has the same meaning as the verb "to lead." It refers to the singer as the leader or head of the band. The second use of lead also serves as an adjective, but it refers to the chemical and describes the type of poisoning the singer got.

Spot the Difference Between Led and Lead

Observe lead and led side by side in the same sentence to see which term to use in which context.