Deciding whether to use lense vs. lens is an easy one as long as you remember one basic fact. Lense is not a word. Discover why it's common for people to use lense even though it's not the correct spelling of any English word. Learn what you need to know to avoid making that error in writing. 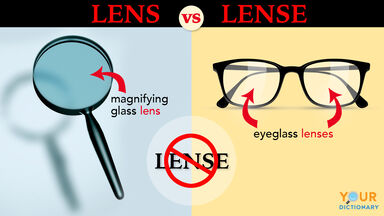 Definition: What Is a Lens?

A lens is a transparent surface, such as a piece of glass or a special type of plastic, that has been specially constructed so that it can disperse or concentrate rays of light. A lens can be concave or convex, depending on the direction it curves. The shape of the curve impacts how light behaves when it passes through the lens.

The word lens can also be used in a figurative manner. For example, the phrases "through the lens" or "through a lens" are examples of metaphors using this word.

Used in quotations like the examples above, the word lens doesn't refer to a concrete transparent object. Instead, this usage is treating the word lens as a synonym for words like perspective and angle.

Lense vs. Lens: Why the Confusion?

Examples of Lens in a Sentence: Singular and Plural

For more insights into using the correct singular (lens) and plural forms (lenses) of these words, explore a few sample sentences.

Notice that lense is not used in any of these sentences. That particular combination of letters (lense) would be a language usage error or spelling mistake.

Now that you know that lense is not actually a word and are clear on the fact that lens is singular and lenses is plural, you'll be able to consistently use these words correctly. Of course, lens and lense are not the only terms that are easy to get mixed up or to spell incorrectly. Boost your language arts skills by reviewing some of the most often misspelled words in the English language. You may also find it helpful to review some examples of irregular plural nouns to ensure you clearly understand some of the more complicated singular to plural conversions.