When To Use Lets vs. Let’s

A single apostrophe is what separates lets and let's. They’re pronounced exactly the same, but have very different meanings. Both lets and let's are based on the same root verb: Let, which means "to allow or give permission." As confusing as they are, it's easier than you think to know where that pesky apostrophe goes. 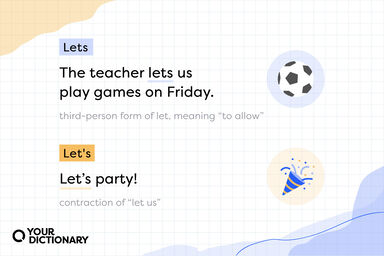 How 'Lets' and 'Let's' Are Different

Using lets when you mean let's might be an embarrassing grammar mistake that could also cause an unintended misunderstanding. That’s because they have different meanings:

Many people mix up these words because "let us" is rarely heard in modern English, especially in casual conversation, because it sounds too formal. Let's generally means "we should," used when making suggestions about something to do. Contractions, like can’t and won’t, always require apostrophes while verbs never do.

How To Use ‘Lets’ in a Sentence

When you use the word lets, you're using it to describe what a singular or collective noun is doing. These sentences are always in the present tense, as the past tense version of lets is always let, no matter the speaker. Sentences that use lets include:

Try substituting lets with let us in each sentence. For example: "The teacher let us us play games on Friday" or "My mother never let us me have dessert before dinner." They don't make sense because the verb let now has two objects.

How To Use ‘Let’s’ in a Sentence

Let's usually appears at the beginning of a sentence or clause. That's because the us in the contraction let’s is the subject of the sentence:

These sentences seem like they're in the present tense, but they're actually imperative sentences. Let functions like the modal verb should in these cases.

Two especially tricky phrases in the English language are lets go and let’s go. Both are common in conversational speech, which makes it easy to mix the two up. Lets go refers to a subject releasing something:

You also use lets go without an apostrophe when using the idiom that means firing or dismissing someone from their job:

Business is always stable, so our manager rarely lets go of any employees.

Notice that both lets go and let's go come before prepositions. However, only lets go is followed by of. Other prepositions, such as to or on, tend to follow let's go.

Even the most seasoned of English users will mix up lets and let’s, so let’s be kind to those who mix up a measly apostrophe. Just remember: If let us doesn’t work in the sentence, it’s probably lets you want.