“Licence” vs. “License”: Which Is Correct?

You hit the open road, wind in your face, someone in the passenger seat trying to navigate but only getting you lost, while your kids in the back squirm and ask, “Are we there yet?” every 10 minutes. This magic moment is brought to you by the immense privilege of having a driver’s license. Or is it driver’s licence? Both are right depending on regional differences, but it can get more complicated than you realize. 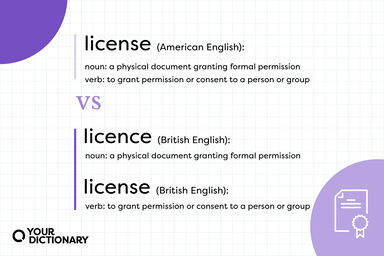 “Licence” or “License”: Which Is Correct?

Both licence and license are correct spellings of the same word. The difference in spelling largely comes down to regional differences. In American English, you will only ever see license spelled with an “S.”

The really confusing part comes from British English, which uses both license and licence. However, they aren’t interchangeable and depend on usage and what you’re talking about.

What Do “Licence” and “License” Mean in British English?

In British English, licence is a noun that refers to "formal permission from the government or other authoritative body that allows you to do something." It can also refer to "a certificate or other physical document symbolizing that formal permission."

You use license in British English as a verb that means "to grant permission or consent to a person or group."

If you use British English or you’re reading something that uses British English, it might take a little more work and some context clues to figure out the right word.

A quick way to remember: Think of fences. A sturdy wooden fence is a noun, and fence is spelled with a “C,” just like licence (which is also a noun in British English).

What Does “License” Mean in American English

License is also the verb form in American English referring to "the act of granting permission."

If you’re writing in American English, you have it easy. Whether it’s a noun or a verb, you can just go with license with an “S,” and you’re set.

What’s interesting is that we have words like that in American English usage, too. Prophecy is a noun referring to "a prediction or foretelling that is to come," while prophesy is a verb meaning "to predict or foretell something."

Similarly, advice is a noun referring to "a recommendation or bit of guidance," while advise is a verb meaning "to offer guidance or recommendation."