Lite vs. Light: Weighing the Difference

Is your cake fluffy and light or is it lite? Depending on which spelling you use, you alter the meaning of the sentence completely. Explore the differences between light and lite, as well as their meanings and uses. 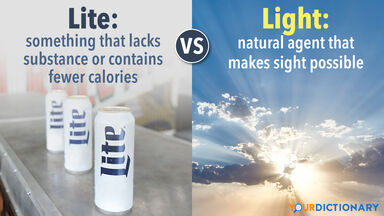 Defining the Difference: Lite and Light

While they may appear to be different spellings for the same thing, light and lite are completely separate words. Lite is not a substitute for light, and they cannot be used interchangeably. They are homophones, words that are pronounced the same way but have different spellings and definitions.

Meaning and Usage of Lite

Lite refers to low-fat, low-sugar or low-calorie foods. It can also mean "lacking in substance or legitimacy."

Using Light in a Sentence

Light can take the form of a noun, verb, adjective, or adverb. The meaning varies depending on the part of speech.

Examples of Light as a Noun

When used as a noun, light refers specifically to the natural agent that makes vision possible. It can also refer to the figurative expression in someone’s features or to a mental or spiritual illumination or awakening.

Examples of Light as a Verb

Light as a verb refers to the action of igniting a light or fire either literally or figuratively. It can also take the past tense form lit.

Examples of Light as an Adjective

As an adjective, light takes on many meanings depending on the context. It can refer to something that has comparatively little physical weight or is not heavy. It can also mean something fair-colored, the ability to see, or something that is not mentally or emotionally taxing.

Examples of Light as an Adverb

As an adverb, light must modify a verb. Therefore, it only works in a couple of scenarios, particularly to do with travel and dining.

Light and light are often confused with each other or used in place of one another. This is not unusual with homophones. View similar terms like cite, site and sight or accept and except