Literally vs. Figuratively: The Facts on Differences and Use

The word literally often shows up when the speaker means figuratively. Both words are adverbs, and both are often found around common expressions and sayings. So why do grammar sticklers cringe when they're used incorrectly? Keep reading to learn the difference between literally vs. figuratively and when you should use each word in speech and writing. 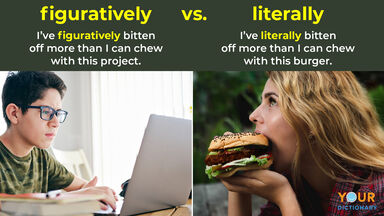 Literally: When Something Actually Happened

The adverb literally means "exactly true," or that something actually happened, without exaggeration. If you say it takes "literally two minutes" to arrive at a destination, you don't mean "a short amount of time" — you mean precisely two minutes.

Additional examples of literally in a sentence include:

Literally in these cases helps readers to know that you're not exaggerating what you're saying. It also helps when your statement appears to be an idiom or common expression, but it's actually true. For example:

In these cases, literally lets the reader or listener know that you're not using a metaphor. You want them to apply the actual, non-metaphorical meaning of the words you're using. The main difference between literally and figuratively is that literally basically means "not figuratively."

Figuratively: When Something Metaphorically Happened

Figuratively is also an adverb, but it relates to figurative language. It refers to the metaphoric and non-literal meaning of words. For example:

You only need to use the word figuratively if there is a risk of your reader or listener accidentally taking you literally. Most idiomatic expressions are so common to the English language that you don't need to clarify that you're using them figuratively. For example:

If you add literally to these sentences, you completely change their meaning. For example, the car dealer literally selling a lemon means he's selling a piece of fruit, not a junky car. That's why knowing how to use figuratively vs. literally is important.

The most common misuse of literally occurs when people are using idioms. If you take out literally from these sentences, they work as common expressions.

Exaggerations, also known as hyperboles, are another form of figurative language. People often use literally to emphasize their point, but it's incorrect when that point is exaggerated.

Wrong: Literally as an Intensifier

You'll also find that people use literally to mean "very." This usage typically appears alongside superlative adjectives when someone is making a strong point.

As you can see, the solution to all of these misuses is to remove the word literally. When in doubt, not using the word is your best solution.

Both Literally and Figuratively

Writers enjoy idiomatic phrases that work both literally and figuratively in a sentence. That means they actually happened, and the metaphorical meaning applies as well. You may see "figuratively and literally" used in these instances, which include:

It takes a strong knowledge of English idioms to use these double meanings. But if you can get it right, they add a lot of depth to your writing.

It's (Figuratively) a Headscratcher

If you're torn about using literally vs. figuratively, just consider whether the event actually happened. Because literally is used incorrectly so often, it's a good rule of thumb to only use it when you want someone to know that you're not speaking figuratively. Clear up more confusing grammar differences with an explanation of alright vs. all right. You can also become a grammar master with this easy trick for using who vs. whom.