Loath vs. Loathe: Stop Struggling Between the Meanings

Both loath and loathe describe a hateful or dreadful situation. But that little -e does more work than you think! Decide which one you should use when you really, really don't want to do something. 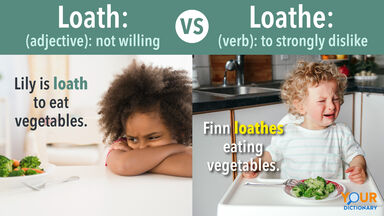 Is It Loath or Loathe?

It's easy to mix up loath and loathe because of their similar spellings. But their definitions, functions in a sentence and slightly different pronunciations keep them from being the same word.

Neither word has a positive connotation, and they both describe an undesirable situation. But despite their similarities, mixing up loath and loathe can result in a spelling error that may affect the meaning of your sentence.

When you are loath to do or try something, you really don't want to do it. A synonym for loath would be "strongly reluctant." Loath only functions as an adjective in a sentence, and it never comes before the noun it describes. You would never say "the loath child won't eat his broccoli." Instead, you would say "the child is loath to eat his broccoli."

Additional examples of loath in a sentence include:

Notice the grammatical pattern of loath in these sentences. It follows a noun and a linking verb ("I am loath") and comes before an infinitive verb ("to reschedule").

Loathsome is an adjective that can come before the noun it describes, such as "the loathsome crocodile" or "my loathsome math homework." Remembering this adjective can help you quickly decide whether you should say loath or loathe. After all, loathesome certainly doesn't look correct!

Loathe Means You Hate It

The verb loathe is usually what people are trying to use when they're choosing between loath and loathe. It describes the action of hating or disliking something very strongly. For example:

Loathe is a transitive verb, meaning that it needs a direct object to transfer its action. In other words, the subject must loathe something, whether it's a person, a gerund that ends in -ing or any other noun.

Why Loathing Gets Tricky

Many people mix up loath and loathe because of the word loathing. It has no -e at the end, like loath, but it's the present progressive form of the verb loathe. That's because loathe drops the -e when it changes tense, just like the verbs clothe (to clothing) and bathe (to bathing). Try to think about these similar words when using loathe or loathing in your sentences.

A Fun Tip to Remember the Difference

Now that you know how loath and loathe are different, how do you choose the right one going forward? It's all about the letter "e"!

While the pronunciation difference between loath and loathe is small enough to hide in spoken conversation, there's no mistaking that erroneous -e when you're writing the wrong word. However, once you know how these commonly confused words function in a sentence, that spelling error is an easy one to avoid. Straighten up more problematic word pairs in your writing with a quick guide to premier vs. premiere.