You don’t loose your keys, you lose your keys (or, if you have a nice key ring, you don’t lose them at all). It may not seem like one “o” makes a difference, but loose and lose have different origins, meanings, functions, and pronunciations — and mixing them up can really make some people lose their minds. 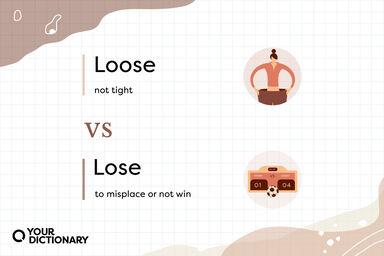 Loose is pronounced “loo-s,” rhyming with moose. It comes from the Middle English loos, meaning “free from bonds,” and functions as an adjective to describe something that’s not secured.

Loosen: To Make Something Less Tight

When you add an “n” to make loosen, it functions as a verb.

The verb lose comes from the Old English losian, meaning “to fail to keep” or “to be lost.” It’s pronounced “looz,“ rhyming with shoes, and it refers to something that you no longer have (as in “lose your keys”) or something that was defeated (as in “lose the game”). For example:

When you change lose to lost, it’s a participial adjective that modifies a noun, or a past-tense verb.

Loss: The Process of Losing Something

When you use the noun loss, you’re describing the process of losing something, often in the context of grief. For example:

Many people also struggle when choosing between loosing and losing. But they’re not interchangeable — in fact, only losing is correct.

The fact that loosing isn’t a real word doesn’t stop people from using it, however. If you have a hard time telling the difference, try replacing the word with loosening. Does it make sense? If so, just add the “en.” If not, you want the word losing.

Both loser and looser are real words, but when you’re trying to insult someone, you probably want the noun loser. It describes someone who loses, as in winners vs. losers, as well as someone who is unpopular. For example:

The word looser is a comparative adjective that means “more loose.” For example:

Like the other forms of loose vs. lose, it may not seem like that extra “o” matters much. But if you try to call someone “a total looser,” you’re the one who’s going to look like a loser.