Magma vs. Lava: What Is the Difference Between the Two?

Volcanoes are awe-inspiring geologic wonders, and most people associate them with the molten hot liquid that spews out of them. Some people call it magma, and others call it lava, but which is correct? 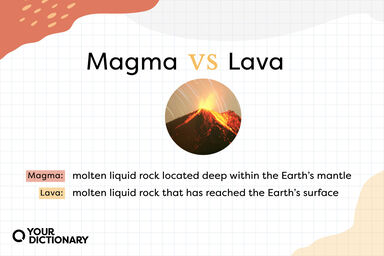 Defining the Difference Between Magma and Lava

While they are completely different words, magma and lava are substantively the exact same thing. They both refer to molten liquid rock, rolling underneath us, flowing out of volcanoes, and forming the world’s landmasses. So why the differentiation? Mostly, location.

Magma is liquid rock located deep underground. It makes up much of the Earth’s middle layer, known as the mantle. Both magma and lava are made up of various minerals, mostly silicon dioxide with smaller percentages of carbon dioxide, sulfur and water vapor.

Lava is magma that has broken through the Earth’s crust and reached its surface. Lava may also refer to the hardened rock that forms when lava cools, which is no easy feat. Lava can be about 1200-2200°F. For reference, cast iron melts at about 2200°F, and human skin sustains first-degree burns at 118°F.

Lava comes from the Italian lava, meaning “torrent or stream.” The root word here is lavare (to wash).

The fact is, unless you’re talking directly to a geologist or volcanologist, it’s not a huge deal to mix up magma and lava. People know that you’re talking about hot, melted rock either way, but for your own edification, here are some sentence examples:

The difference between magma and lava is all about location. If you can see it, it’s probably lava, and you should immediately find somewhere cooler where you can learn even more about geology: