The Real Difference Between Jail and Prison

Jail and prison are both forms of incarceration. But while the terms jail and prison may seem interchangeable, that’s not the case. They differ by the length of incarceration, the seriousness of the crime, and the entity that runs them — and those differences really matter when it comes to receiving a jail sentence vs. a prison sentence. 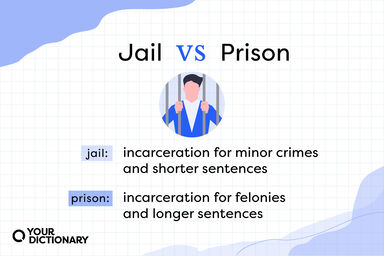 Man behind bars with Jail and prison Definitions
Advertisement

The Differences Between Jail and Prison

You can tell the difference between jail and prison by examining their details:

Jail, which is a Middle English word from the Latin cavea, meaning “cage,” is meant for short-term offenders who are waiting for trial or who have committed lesser crimes (known as misdemeanors). Examples of offenses that are sent to jail instead of prison include:

Jails are run by local law enforcement, which can include sheriffs or city officials. Often, people who have been wrongfully convicted but can’t pay their bail must remain in jail until their trial. If they’re found guilty of a felony, they would then receive a prison sentence.

Another unique feature of a jail is that inmates might get out and into the community to work through rehabilitation programs. Additionally, the jail might offer vocational or education programs to inmates. An inmate incarcerated for drugs might take part in a substance abuse program to help ensure they don’t return to jail. Inmates in jail with jobs might take part in work release programs to maintain their employment.

The word prison comes from Old English prisoun, meaning “captivity” or “dungeon.” A person incarcerated in prison has been convicted of a major criminal offense called a felony. Felonies include major crimes such as:

Unlike jails, prisons are run by state or federal governments. They can also be privately owned prison systems that are contracted by the states but run by large corporations. Since these facilities are state, federal or privately run, they are larger in scale with more inmates than a typical jail.

Prisons come with different levels of security, according to the Federal Bureau of Prisons:

Prisons do offer work and rehabilitation programs for criminals of non-violent crimes or at the end of their sentence. Not all inmates are eligible for these programs depending on the severity of their crimes or sentence.

Another word that appears in conversations about incarceration is penitentiary. It comes from the word penitence, meaning “regret for one’s actions” and refers to prisons, not jails. If you get confused about the usage of penitentiary vs. jail, think of one goal of a prison sentence: to feel regret for your actions, to reform, and to re-enter society having served your time.