Martial vs. Marshall: The Difference Is Law

During martial law, the marshall (or marshal) marshals (or marshalls) his deputies to restore peace. It’s easy to mix up martial, marshall and marshal because they sound exactly the same, but one of them relates to the Roman god of war while the others relate to horses — and learning which is which may surprise you. 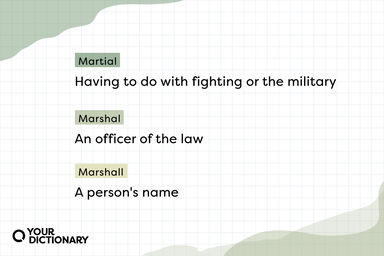 Use Martial to Describe Fighting

Martial, the first in the set of homophones, means “about the military” or “warlike.” Those who know their mythology know that Mars is the Roman god of war, which is why the root mar- appears in the term martial (much like it appears in martes, the Spanish word for Tuesday). You use martial to describe terms having to do with fighting or the military.

What Is Martial Law?

Martial law (not marshal law) occurs when the military takes control of a town or population. It temporarily removes civilian authority and rights during times of war, natural disaster or civil disorder. The United States Supreme Court has found that declaring martial law is constitutional, but only if the military cedes power back to the people after a crisis has passed.

Martial Is Only an Adjective

Marital functions as an adjective in the English language. For example:

Use Marshall (or Marshal) to Describe People

Marshal is a Middle English word meaning “high court officer” (from the Old French mareschal and Germanic marhskalk meaning “mare-servant,” someone on a horse). A marshal is a high-ranking officer of the law or military, which is why it’s often mixed up with martial. You may see marshal in front of an officer’s name, such as “Marshal Patterson,” or as a group of officers, such as the U.S. Marshal Service or Federal Air Marshals.

You can also use marshal as a verb to describe “gathering a group of people up.” It appears in the popular phrase “marshal the troops,” which means “get the troops together.”

So why is it spelled both marshall and marshal at various times? The word Marshall is a popular surname (as well as a first name) in English-speaking countries and comes from the word marshal. You use Marshall when discussing proper nouns, such as Marshalls Department Store, or even if a marshal is named Marshall (“please marshal Marshal Marshall”). When you’re writing the verb marshal, you can spell it either marshaling or marshalling, though most style guides perfer the former.

Marshal Is a Noun and Verb

Unlike martial, marshal is not an adjective unless you’re using it before a marshal’s name. It does function as a noun and a verb:

Are there other word pairs that are always slipping through your spell check? Clear them up for good with: