Is It Masters Degree or Master’s Degree? Grasping the Grammar

You’re writing a congratulations card for your friend’s recent graduation, when suddenly you stop. Is it master’s degree or masters degree? And is it capitalized or not? You’d better figure out the answer soon — especially if your friend just earned a Master of Arts in grammar. (Wait, why is that one capitalized?) 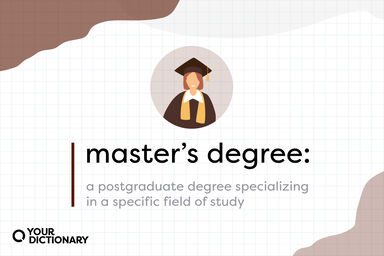 "Master’s": The Degree Belongs to the Master

Use an apostrophe when referring to a master’s degree. The degree belongs to the person who has just demonstrated a mastery of their subject — they are now a master. Therefore, it is a master’s degree (or colloquially, a master’s) because master’s is a possessive noun.

When you say masters degree, you’re not showing ownership. Masters functions as an adjective in this case, and since it’s not an adjective, the phrase doesn’t make sense.

Only Capitalize the Specific Degree

But isn’t it respectful to capitalize such an important degree? Not necessarily. The term master’s degree is a common noun, meaning that it’s a general way to refer to a postgraduate degree, so you don’t capitalize the phrase master’s degree.

Note that the title of the degree (“I hold a Master of Business degree”) is capitalized, but speaking about it generally (“I earned a master’s in business”) is not, because master’s is a common noun.

How To Talk About Master’s Degrees

Is the Term “Master’s Degree” Controversial?

The word master comes from the Latin magister, meaning “teacher.” But around the 14th century, the word master became synonymous with “person in control or authority” in the context of business — including the slave trade. A master was a person who owned slaves and controlled every aspect of their lives.

Although this definition doesn’t derive from the Latin educational master, recent conversations in the 21st century question the presence of master in master’s degree as a link to slavery. In response, Harvard University changed the names of academic titles (including “house master” to “faculty dean”), but the term master’s degree remains intact.

The conversation doesn’t stop there — everyday terms like master bedroom are no longer in common use in the real estate world, and the technological industry has recently eliminated the term “Master/Slave” from its terminology. Reexamining our use of language, no matter how entrenched it is in our everyday life, is just part of the natural evolution of English.