When to use “might” vs. “may” can get confusing. To try to clarify things, it’s important to break down the differences between “might” and “may” in tense, probability and even permission. Because explanations can be boring, examples are going to work to really drive the “might” and “may” difference home. 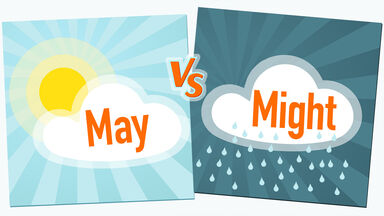 “Might” and “may” discuss the possibility of something happening in a situation. However, how they are used in a sentence can vary. One clear way to know which one to use is by looking at the tense of the sentence. “Might” is the past tense of “may.” When deciding which one to use, you can use the sentence tense to decide on “might” or “may.”

Refer to these examples to see how “might” is used:

Now, you can see how “may” is used with present tense:

The clear winner is easy when it comes to tense. Now, you can look at gauging probability with “may” and “might.” This choice isn’t as clear, but there is a simple way to remember which to choose.

Do you know how probable it is that you are going to go to that football game? What is the probability of you scoring an “A” on your test? Determining whether something is very likely or remotely likely is the difference between choosing “may” or “might” for your sentence.

Here is the breakdown:

Sound confusing? Examples can work to really clear this up for you.

Use of “May” in a Sentence

When you use “may,” it means something is probably going to happen. So, you will probably go somewhere or probably get something. It has a high likelihood of happening, like:

In these examples, the probability of something happening is pretty high. There is still a little question or doubt about whether or not it will happen, but it is very possible.

When you use “might,” it is less likely to happen. So, to keep it simple, you will probably not go somewhere or probably not get something. It has a very low likelihood of happening, like:

Here, you can see the probability of something happening is really low. It could happen, but it’s not likely.

When it comes to asking for permission, “may” and “might” are a couple of your go-to words. They’re right up there with “can.” These words can be used interchangeably to ask for permission, especially in less formal situations. However, you’ll notice that “may” sounds more polite.

There is one area that gets a little muddy when it comes to “may” or “might” for permissions. That is when you use a negative hypothetical situation.

When it comes to the English language, using the right word can avoid confusion and provide clarity. “May” and “might” may seem simple enough, but the two have some very subtle differences. Now that you’ve now been introduced to “might” and “may,” it might be a good idea to check out other auxiliary verbs. You may even find it exciting!