Median Vs. Average: Do They Mean the Same Thing? 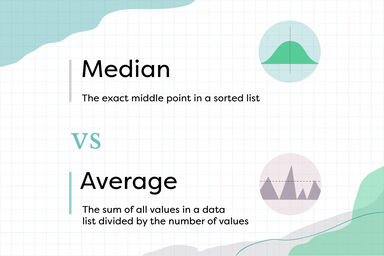 Stuck In the Middle: What Is the Median?

Median comes from the Medieval Latin words medianus and medius meaning “middle.” You may recognize the word from the last time you were stuck in traffic. The highway median separates the two lanes going in opposite directions.

In math and statistics, median refers to the middle of the dataset. If all the values are sorted in ascending or descending order, the median marks the exact halfway point in that list.

Getting Mean: What Is the Average?

Sometimes, people say average as a broad term that describes the “central tendency.” The central tendency is the value that tries to identify the typical, or central, value in a large dataset. Literally, it’s trying to find the center in your data.

Depending on the data and the person interpreting it, the “average” can refer to the median or mean. Less commonly, it may refer to the mode, which is the value that shows up most frequently.

Mathematically, the average refers to the mean. This is the sum of all the values in a data list that is then divided by the number of values.

When Should You Use the Median Vs. the Average?

In almost all cases, the average (or mean) is considered the best representation of central tendency for most data sets.

However, don’t ignore the median. The median is preferred over the average when the data:

Median Vs. Average: Tips for Telling the Difference

Discerning between the two can get confusing, especially when you factor in the mean. Mean and median both start with ‘m’ and are just two letters away from being the same word.

Median is a little easier to remember. Median is the middle, and both “median” and “middle” have ‘d’ in their middles.

Think of the average as “mean” because it involves more calculating (both addition and division). Another good nonsense mnemonic: don’t be mean, be average.

Not Your Average (Or Median) Bear

With a better understanding of median and average, you have the tools to interpret data in all forms. Go forth and explore all the fun numbers and calculations that math and statistics have to offer.