The Important Difference Between Memorial Day and Veterans Day

If you've confused Memorial Day and Veterans Day, you're not alone. Aside from being federal holidays, both technically involve honoring and remembering soldiers. Thanks to the troops, you get a couple days of the year off of work and school, but it’s worth understanding the difference to uphold the importance of both holidays. 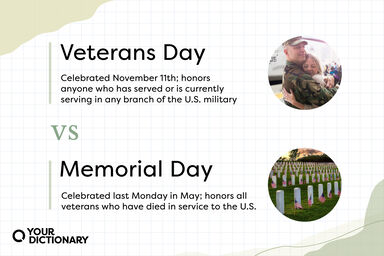 What Is Veterans Day?

Celebrated on or around November 11 every year in the United States, Veterans Day was initially called Armistice Day. An armistice is "a truce, ceasefire, or temporary agreement made by both sides of the war to stop fighting." It’s borrowed from the French word armistice that means the same thing.

World War I ended with an armistice in 1918. Historically and poetically, it was the 11th hour of the 11th day of the 11th month. In 1938, Armistice Day was designated a federal holiday.

What Is a Veteran?

When specifically referring to the military, a veteran generally refers to “anyone who has served or is currently serving in any branch of the military.” The plural of veteran is veterans. Not to be confused by animal doctors (veterinarians).

Veteran comes from the Latin word veteranus, meaning “an experienced or mature person.”

How Do You Spell “Veterans Day”?

Although you might be tempted, Veterans Day is spelled without an apostrophe. Both Veteran’s Day and Veterans’ Day are incorrect for different reasons. Veteran’s Day implies a singular possessive, meaning a day belonging to one veteran, but the holiday is designed to honor all veterans.

Veterans’ Day might seem like the right choice as a plural possessive, but the U.S. Department of Veterans Affairs specifically discourages that spelling. The reason: The day doesn’t belong to anyone. It’s for honoring veterans.

As with all holiday names, you capitalize both words in the name, so it’s Veterans Day, not veterans day.

What Is Memorial Day?

Observed on the last Monday in May, Memorial Day has some hazy origins, though people know that the first Memorial Day (then known as Decoration Day) was held in 1868. It was initially a holiday for honoring Union soldiers who had died during the U.S. Civil War.

Following World War II, Memorial Day became more commonly used than Decoration Day, but the official switch didn’t come until 1967. This helped to expand the holiday, honoring all veterans who died in service.

What Is a Memorial?

It may have multiple origins, particularly from the Latin words memorialis and memoriale as nouns meaning “a record,” as well as the French word memorial, meaning “commemorative, remembered, or relating to memory.”

Memorial Day uses a mix of both meanings: The holiday acts as a memorial itself, while the purpose of the day is to preserve the memory of people who have died in military service.

How Do You Spell “Memorial Day”?

Memorial Day is pretty straightforward in its spelling. You don’t need to worry about apostrophes or hyphens. Just make sure you capitalize both words, and you’re good to go.

What Is Decoration Day?

Decoration Day was the initial name for Memorial Day, and some regions of the U.S. do still have Decoration Day traditions. The word decoration can be confusing in this application because most people associate that with Christmas trees and fairy lights.

Decoration Day likely got its name because it involved decorating a soldier’s grave with flowers. Decoration also refers to badges and medals awarded to soldiers as a mark of honor. A decorated soldier is one who has earned several of these honors.

Veterans Day vs. Memorial Day: What Do You Say to Veterans?

It’s important to remember that Veterans Day honors all military personnel, current and previous. While there aren’t any official greetings for Veterans Day, saying “thank you” to and otherwise showing appreciation for the military folks in your life is pretty standard.

Think of Memorial Day as a day of mourning and remembering those who have passed, which might involve visiting graves or partaking in religious practices that honor deceased friends and family members. That means that “greetings” are a bit strange. You might send general messages of appreciation for soldiers who have passed. For example:

Thank you to the veterans who have given their lives in service to this country.

And as well-intentioned as it might seem, that also means you shouldn’t wish a living soldier “Happy Memorial Day!”. They’re alive, and it’s not necessarily a happy occasion.

As mentioned, a simple “thank you for your service” is typically enough of a greeting on Veterans Day. Other variations on that can include:

You can also show your appreciation by simply spending time with your favorite veteran.