Misogyny vs. Sexism: Learning Which Is Which

When people talk about “the patriarchy,” they’re not merely describing a world that’s run by men. They’re referring to a male-dominated system that’s upheld by misogyny and sexism — two words that describe an anti-women sentiment, but with different meanings. 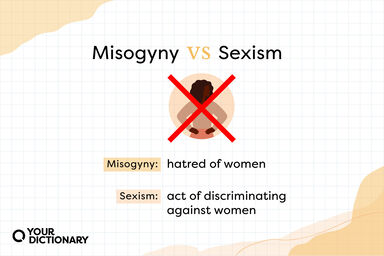 How Does Misogyny Differ From Sexism?

It can be difficult to discern the difference between misogyny and sexism, since both attitudes reflect poorly on women and they have similar popularity in modern usage. However, there are a few key differences.

Misogyny Is the Hatred of Women

Misogyny means “hatred of women.” It comes from the Greek word misogynia (miso- meaning “hatred,” gyn- meaning “women”), and describes a person’s inherently negative opinion and attitude toward the female sex. This attitude may include a belief in anti-woman stereotypes, outdated expectations of traditional femininity, and a lack of regard for women’s rights.

The term came into popular use with a 17th-century pamphlet written by Joseph Swetnam titled The Arraignment of Lewd, Idle, Froward, and Unconstant Women, which castigated the vast majority of women. The pamphlet garnered a critical response, particularly in the play Swetnam, the Woman-Hater, Arraigned By Women, in which Swetnam went by the alias “Misogynos,” leaving little room for interpretation. It regained popularity in the 1970s feminist movement and has been part of the women’s rights conversation ever since.

Sexism Is Discrimination Based on Sex

Sex, the root of the word sexism, comes from the Latin sexus, meaning “half the race” (from seco — “division”). Like racism, ableism or ageism, adding the suffix -ism to sexism indicates a discriminatory attitude based on the attribute of the root word. Sexism, therefore, is the discrimination against a person based on their sex.

Sexism is the system that restricts women’s rights and opportunities based on a deeply rooted attitude of misogyny. If misogyny inspires someone to make a derogatory comment toward a woman in the workplace, sexism is the system that allows that person to keep working without consequence. Based on its definition, sexism can mean discrimination toward the male sex as well, but it’s most often used when discussing discrimination against women.

Sexism has been such a part of human nature that changing it often requires policy change in the workplace and even the government. Examples of discrimination involving sexism include:

Why Can’t We Just Fix Sexism?

Sexism appears simple to fix. For example, if women are receiving lower pay at a company, the company can simply change their policy and pay the women the same amount as men. However, the change does nothing to change the misogynistic decision that began the policy — and without examining the misogyny behind sexist discrimination, the system cannot truly change.

It comes from the French chauvinisme, from Nicholas Chauvin, a character in the 19th-century vaudeville show La Cocarde Tricolore by Théodore Cogniards. Chauvin was an extremely loyal officer in Napoleon’s army, leading the term chauvinism to refer to one’s extreme nationalism.

Over the years, chauvinism became synonymous with “superiority,” and shifted into white chauvinist and race chauvinist during the 20th century civil rights movement. A few decades later, the 1970s’ feminist movement adopted the phrase male chauvinist (and in some circles, male chauvinist pig), and the phrase became forever linked with men who mistreated or  discriminated against women.

Embed Respect Into Your Written Language

Many words associated with discrimination are loaded — even if you don’t realize it. Keep your writing respectful with these guides to avoiding prejudice and bias: