Mistrust vs. Distrust: Be Confident In Your Usage

Do you mistrust someone or distrust them? Both words refer to a lack of trust or to not trusting someone or something. Whether or not they can be used interchangeably is often a matter of confusion or debate. Explore the subtle differences between mistrust and distrust and when and how to use each term in a sentence. 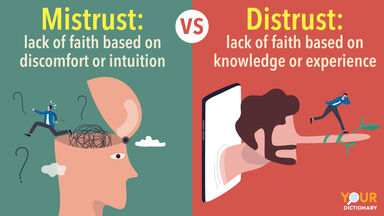 The Difference Between Mistrust and Distrust

The word trust was first recorded sometime in the 12th century. It is derived from the Old Norse traust (trust) and the subsequent German word trost ("comfort" or “consolation”). Eventually, the prefixes mis- and dis- were applied to trust to form the words mistrust and distrust. Although their meanings are similar, the subtle differences influence how they are used in a sentence.

Tips to Remember the Difference Between Distrust and Mistrust

To remember the difference, you can associate these terms with other words that begin with the same prefixes.

Usage and Meaning of Mistrust

The term mistrust was first recorded in the late 14th century. The prefix mis- means “ill” or “wrong.” Mistrust can be used interchangeably with distrust when referring to a lack of trust in someone. However, if you want to be more specific you should apply mistrust to instances where you are acting based on instinct or feeling.

How to Use Distrust

The word distrust dates back to the 16th century. The prefix dis- means “apart” or “away.” As a verb, distrust means “to not trust” or “withhold trust.”

Many words that begin with the prefix dis- are easy to confuse, but this doesn't have to be the case. Discover other terms beginning with dis- such as discreet and discrete. Then check out how the meaning changes when you change the prefix from dis- to un- like in disinterested and uninterested.