Modelling vs. Modeling: Use With Confidence

Are you modeling a dress or modelling a dress? This is a trick question because modeling and modelling mean the same thing. Whether you’re modeling (or modelling) clothes, a product or a building, the meaning is consistent, and so are the spelling standards. 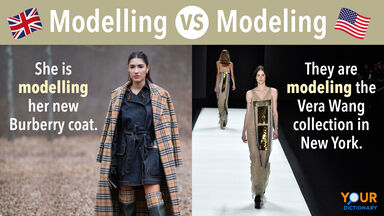 When to Use Modeling or Modelling

When it comes to the difference between modeling and modelling, the only difference is in the extra “l.” The simple answer is that American English spells the word with one “l” and British English spells it with two.

The word model comes from the Middle French modelle, which itself is derived from the Latin modus meaning “manner” or “measure.” Modelling and modeling are two synonymous forms of the verb "to model" which means “to show” or “display,” usually in reference to fashion or a structure.

Examples of Modelling in a Sentence

Modelling is the British English spelling of the verb and ultimately the most commonly used internationally. This spelling is used in the U.K., Canada, Australia, and New Zealand.

Examples of Modeling in a Sentence

Although the double "l" spelling may be seen in the fashion world, modeling is the more common spelling in the U.S.