Moral vs. Morale: Feeling Good About the Difference

Moral and morale don't share the same spelling, pronunciation, etymology, or definition. So why do people mix them up so often? The source of this common error lies in their traditional usage, as well as their modern parts of speech. 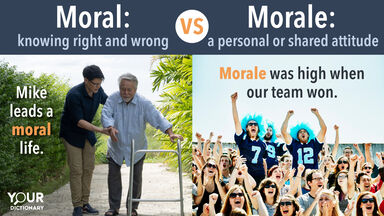 How Moral and Morale Differ

The words moral and morale look similar enough to be commonly confused. However, they're not used or pronounced in the same way.

If you're a moral person, you follow a value system that determines right from wrong. When you're talking about a company's morale, you're discussing how the people in that company feel at a given time.

Both moral and morale come from the same Latin root (moralis — "proper social behavior"). But why are they spelled and pronounced differently? In English, morale is spelled with an -e to reflect the French pronunciation of moral. Morale expresses the French sentiment of esprit de corps, which reflects the shared pride of soldiers fighting for a common good. Today, morale can describe an attitude of camaraderie in any group, as well as someone's personal positive (or negative) feelings of confidence.

Meaning of Moral: An Ethical Standard or Lesson

When you use the word moral, you're talking about knowing the difference between right and wrong. A person may be guided by a personal moral code, or they may operate from an understanding of a shared set of social morals. You can use moral as an adjective (a moral person) or as a noun (the moral of the story).

How to Use Moral as an Adjective

Typically, you'll see the adjective form of moral describing a person who acts in an honorable way or the code by which they live their life. For example:

Usage of Moral in Common Expressions

You may also see moral in common expressions or idioms, including:

How to Use Moral as a Plural Noun

When used as a plural noun, morals has the same value-based connotation as its adjective usage. In this form, it is usually synonymous with the noun morality. For example:

How to Use Moral as a Singular Noun

Moral as a singular noun means "lesson or principle." You'll commonly see this usage in the phrase "the moral of the story," especially when discussing Aesop's Fables. For example:

Meaning of Morale: The Attitude of a Person or Group

Morale only has one usage. It's a noun that belongs to a person or group and is typically expressed in degrees ("high morale" or "low morale"). For example:

A Trick to Tell the Difference Between Morale and Moral

Understanding their definitions and uses is helpful, but how do you actually pick the right word when you're writing? Think about the word morality. It sounds like morale, but there's no -e at the end, just like the word moral. When you're discussing morality, use moral.

It can feel embarrassing to make a simple mistake like mixing up moral and morale. But understanding the difference between these words can not only improve your writing, it can also provide you with a better understanding of morality in general. Learn about the nuanced differences between morals, ethics and values with a straightforward set of examples. Then discover the difference between amoral and immoral.