We mustache you a question: Is it moustache or mustache? Since people first grew out their upper lipholstery, the spelling debate has raged on. Does that old tea strainer require an extra “O,” or should it do without it? The real answer: It depends on where you’re from. 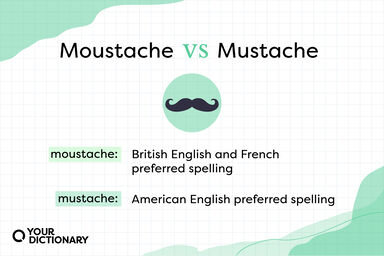 Which Is Correct: “Moustache” or “Mustache”?

If you’re constantly worried about what to call your soup strainer, rest easy knowing that neither moustache nor mustache is wrong. Both are nouns that refer to the various styles of facial hair covering the upper lip, and both are correct.

The main difference between the two comes down to regionalism. Mustache is the preferred spelling in American English, while British English prefers to add that extra “O” in.

However, these rules aren’t set in stone. Some Americans might spell it moustache. Regardless of what you use, make sure that you stick with that spelling throughout the text or piece of writing.

The French Origins of “Moustache” and “Mustache”

Mustache and moustache come from the French word moustache, which referred to the part of a beard growing above a person’s upper lip. That French form comes from the Italian mostaccio.

This can actually help you understand a bit of a trend with British English spellings. You have British English words like colour or omelette that are also of French origin and keep some extra letters where American English might do without them (color and omelet). Similarly, moustache keeps that extra “O” as a remnant of its French origin.

How To Pronounce “Moustache” and “Mustache”

Moustache is also commonly pronounced “muh-stash.” However, depending on where you are or your social circles, some people may pronounce it “moo-stosh,” which draws a bit from the French pronunciation of moustache.

What Is the Plural of “Moustache” and “Mustache”?

If you are surrounded by many of these wiry whiskers, you might be curious about the plural form of moustache and mustache. Thankfully, you don’t need to overthink it. Like other plural nouns, simply add an “S” to the end of the word, giving you moustaches or mustaches.

Adjective Forms of “Moustache” and “Mustache”

When you need to describe a person with an ole pushbroom gracing their upper lip, moustache and mustache also have adjective forms.

Moustached and mustached are adjectives that describe someone with some facial hair on that upper lip. Mustachioed is another common adjective to talk about someone with a particularly large, bushy mouth brow.

Other Words for Your Mustache

Whether you use American English or British English, there is no end to the words for describing your abundant lip foliage.

Mustachio (pronounced “muh-stash-ee-oh”) borrows from the Spanish word mostacho and the Italian word mostaccio. While mustachio can be used to describe any mustache, it more often refers to a particularly luxurious or elegantly groomed nose tickler.

Considering facial hair has existed forever, people have come up with an unreal number of nicknames for a mustache. Just the ones used in this article include:

There are countless more out there in the wild, but we’ll shave them for later. In the meantime, you might want to start preparing your own glorious mustache for Movember!