What Is the Difference Between Much and Many? Rules to Know

“Much” and “many” sound very similar, and they both mean large amounts. But, their uses are different in a sentence. To find out the differences, get a breakdown of the rules for when to use “much” vs. “many” in a sentence. You’ll even learn how to avoid grammar traps for “much” and “many” along with a fun memory trick. 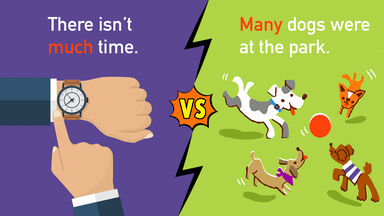 much vs many example
Advertisement

Basic “Much” and “Many” Differences

The English language can be confusing sometimes, especially when it comes to quantities and volumes of nouns. Not only can words have different meanings depending on how they are used, but some nouns can be counted while others can’t. Countable and uncountable nouns are going to use different adjectives.

Enter “much” and “many.” When “much” or “many” are used, it’s to describe a large quantity of a noun. For example, the sky has many shades of orange, but there is still too much blue.

If you had to, you could count the shades of orange in the sky. But, you would never be able to count the amount of blue.

You can see this in action through examples.

“Much” and “Many” Examples

Explanations are great. Examples are better. To get a full understanding of what is meant by countable and uncountable nouns, get examples of these words and how they are used with “much” and “many” in sentences.

Using “Much” With Uncountable Nouns

When you think of uncountable nouns, they are typically those that have only a singular form like oxygen, luggage, water, money, milk, or sunlight. No matter how hard you tried, you wouldn’t be able to count them without adding some sort of countable unit. Adding “much” is telling the reader that there is a large amount of that non-countable noun. For example:

“Many” Used With Countable Nouns

Much and Many Traps to Avoid

The rules of “much” and “many” are simple. Nouns aren’t. Some nouns are irregular or can be both countable and uncountable. Find out how you can avoid falling into traps.

Some nouns can cause confusion when you need to decide whether to use “much” or “many.” In this case, you need to think about the context of the word being used. Examples of nouns that might cause issues include “fish” and “shrimp.”

Need more examples of nouns that can be countable and uncountable? Try these on for size.

Paying attention to how the word is used can really help you decide whether “many” or “much” is the word for you.

You can’t count much, but you can count many.

You can also link the u in much to the u in uncountable.

Both are just fun little memory tricks to help the difference stick.

You have now mastered the use of “much” and “many” in a sentence. It’s not really as hard as you think it will be once you know the rules. Interested in learning more about nouns? You might try figuring out proper and common nouns. There are even fun worksheets to help you master this skill.