Nauseous vs. Nauseated: Feel at Ease Using the Right Word

Does the smell of garbage make you feel nauseous or nauseated? These words seem interchangeable, but they actually have different usages and meanings. Find out which one describes that sick feeling in your stomach. 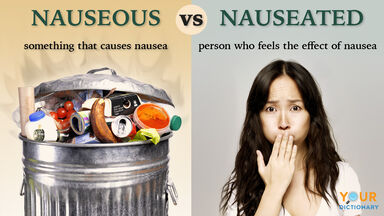 The Difference: Nauseous vs. Nauseated

These words sound similar, but they describe two different situations. The word nauseous refers to something that causes nausea, while nauseated describes that weird feeling when you might throw up.

Nauseous Meaning: Something That Causes Nausea

The adjective nauseous refers to "something that causes nausea." That means that the thing you're grossed out by is actually the nauseous item. Explore examples of how to use nausea in a sentence:

Nauseated Meaning: The Feeling of Nausea

If you want to describe that swirly, sick feeling in the pit of your stomach, the word you're looking for is nauseated. It's the participle version of the verb "to nauseate." Examples of correctly using nauseated in a sentence include:

Are Nauseous and Nauseated Interchangeable?

In modern usage, nauseous is the more common way to describe a gross or disgusted feeling. However, to grammar sticklers, using nauseous vs. nauseated interchangeably may result in confusion. For example:

Word Origin of Nauseous and Nauseated

Both nauseous and nauseated come from the word nausea, which means "stomach sickness or discomfort." But can you see the connection between the word nausea and nautical?

Nautical refers to sailors or ships on the ocean. Its Greek root, naûs, means "ship," and the Greek word nausíā means "seasickness." The word became nausea in Latin, and when added to the Latin suffix -ous, it becomes nauseous — "full of seasickness or stomach discomfort." Nauseate is the verb form of the word nausea — "to become sick."

Grammar Doesn't Have to Be Nauseating