Is It "Noone" or "No One"? What Everyone Should Know

You’ve seen the word noone in social media comments and in the text thread with your cool 14-year-old cousin. Does that mean noone is an acceptable way to spell no one? Sorry, but no — like most things you see online (and in conversations with teenagers), choosing between noone and no one is a bit more complicated than it seems on the screen. 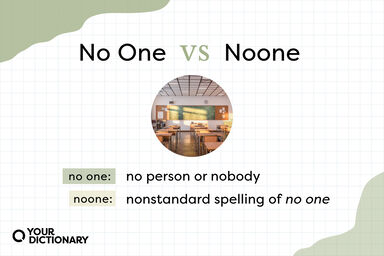 Empty Classroom With No One vs Noone Definitions
Advertisement

No one means “no person” and is synonymous with nobody. It’s always spelled as two words — never noone.

All style guides and dictionaries agree that no one is the preferred version, and noone is the nonstandard spelling (which most word authorities agree is incorrect).

Noone as One Word on Social Media

But wait — what about #noone? You may see noone after a hashtag on social media, but that doesn’t mean noone is the new way to say “no one.” It’s just because you can’t put spaces in between letters in hashtags.

Why Do People Get Confused About “No One”?

Even the indefinite pronouns that begin with no or end with one:

It seems perfectly natural that no one should be noone if these are its fellow indefinite pronouns.

But these words are also compound words. When a word ends in a vowel (as no ends in “o”) and another word begins with the same vowel (as one begins with “o”), they need to have a space between them — also known as an open compound — to avoid confusion.

Compound words can also be hyphenated. And in cases where words share ending and beginning letters (such as co-op or drip-proof), it’s common to hyphenate the word. So is no-one the answer here?

Sadly, no. No-one is considered an uncommon spelling of no one, and it’s even less popular than noone.

Forget the hyphen and hit the spacebar instead.

How To Use “No One” in a Sentence

Not only is no one an indefinite pronoun, it’s grammatically negative. When you use it to replace a noun, you also need to change the verb to avoid a double negative.

But replacing nouns with no one and a positive verb results in very similar messages:

Notice that even though no one replaces plural and collective nouns, it’s treated as a singular noun. In most cases, you’ll need to adjust the verb to follow subject-verb agreement.

Now that noone is officially off the table, can noone fans just switch to none instead of no one? In some cases, maybe — but not in general.

When none functions as an indefinite pronoun, it can be both singular and plural, so you need to adjust the verbs accordingly. For example:

Also, unlike no one, which refers only to people, none can refer to any type of noun. For example:

Give It Some Space

Don’t crowd an important pronoun like no one — let it have some space. Like all right and alright, or a lot and alot, pushing two real words together can only result in confusion and misspelling, even if your cool 14-year-old cousin is doing it.

No text or comment is too important to skip that integral space between no and one. (Unless you’re hashtagging, in which case, proceed.)