The words normalcy and normality are both noun forms of the adjective normal. These words mean the same thing, but one term is much more commonly used than the other. Discover what you need to know when deciding between normalcy vs. normality. 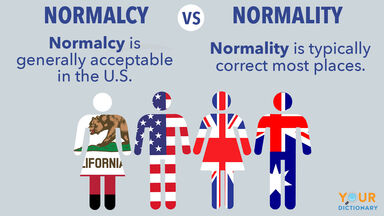 What Do Normalcy and Normality Mean?

The words normalcy and normality are defined as the state of how things usually are, under ordinary circumstances. When you're looking to describe how things are when nothing unusual or out of the ordinary is going on, the state you are describing could be called either normalcy or normality.

Based on definition and grammar (part of speech), the words normalcy and normality are essentially interchangeable. However, preferences vary from U.S. English to British English with regards to which word is best to use.

Which Term Is Typically Correct?

If you want to go with the more commonly used and widely accepted term, you should use the word normality. However, if you're writing or speaking to an American audience, you can opt to use normalcy if you prefer. Of course, you might find it best to stick with the more universally accepted word regardless of location. If so, normality is the best option.

Normalcy vs. Normality: A Historical Perspective

The word normality has been used a lot longer throughout history than normalcy. There is evidence that both words existed as far back as the 1800s, so neither word is a recent addition to the English language. However, normality became commonly used for a very long time before normalcy became part of the vernacular.

The word normalcy started getting a lot of attention in America in 1920 when soon-to-be-president Warren G. Harding used the term in his famous Return to Normalcy speech. Harding delivered this speech in May of 1920 as part of his successful campaign for president. He emphasized his belief that America was ready for a return to normalcy. According to Google ngram, the word normalcy hardly appeared in published books at all prior to 1920 but picked up after that time.

Even though there was a spike in the usage of normalcy around 1920 and usage continued to grow over time, with some ups and downs, the term did not overtake normality with regards to frequency of usage in published works. The word normality still tends to be used more commonly than the word normalcy, likely because it is typically not considered a good option outside of the US. Some consider normality to be more formal than normalcy, which may account for why normality tends to be used so more often.

The word normalness is another noun form of normal that means the same thing as normalcy and normality. This term is not commonly used at all. Technically it would not be incorrect to use it interchangeably with normalcy or normality. However, since the word is used so rarely, chances are that some readers and/or listeners will perceive the term as an error. It's best to choose between normality vs. normalcy or to select another suitable synonym.

If you're concerned that some people might question your choice when you use normality or normalcy, you could opt to instead substitute a synonym into your sentence. There are quite a few options to consider.

Explore these example sentences for more insights into how the words normalcy and normality can be used.

Beyond Forms of Normal

Now that you know how to choose between the noun forms of the word normal, you're ready to make wise decisions about incorporating these terms into your writing and conversations. If you often find yourself struggling to decide between similar words (as many people do!), you may want to explore some other commonly confused words. You might start with similar words that are interchangeable like preventative vs. preventive. That way, you'll be prepared to make the right decision the next time you face a challenging word usage conundrum.