Noting the Differences Between a Possum and an Opossum

Playing possum means playing dead. Or is it playing opossum? Differentiating between possum and opossum can feel unnecessary, but there is a meaningful difference when you get down to it. 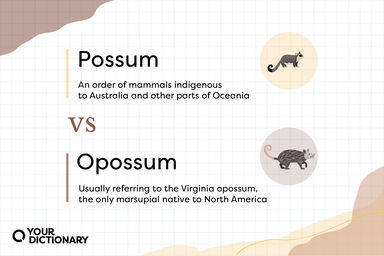 Possum and Opossum: They’re Both Animals

When you’re talking about scientific taxonomies, possum and opossum refer to two different creatures. Both refer to mammals that are marsupials, meaning they have pouches for carrying their young, but they are decidedly different animals.

Where possum includes a large order of species, opossum typically only refers to the Virginia opossum, the northernmost marsupial in the world.

The Origin of ‘Opossum’

Opossum comes from the Powhatan language spoken by Algonquin peoples in Virginia. The word meant “white dog or animal” and referred to the white and gray Virginia opossum that North Americans know and love.

Virginian colonists adopted the Powhatan word, and early forms included aposoum and opassum before landing on opossum. The first usage of the word opossum dates back to about 1610.

By 1613, opossum gave way to the variation possum by the linguistic process of aphesis. Aphesis is when you lose an unstressed vowel at the beginning of a word. You can see this in lone from alone and round from around.

The naming of the Australian marsupials is often attributed to Sir Joseph Banks, a British botanist who thought he saw what looked like opossums in Australia. However, the exact etymological origin of the Australian possum is not well-documented.

Aside from differentiating between animals, some people suggest that opossum should be pronounced without the “o” so that it sounds just like possum. In fact, although opossum came first, possum has become more widely used.

Unless you’re a biologist or talking to one, it genuinely doesn’t matter whether you say possum or opossum. People know you’re talking about those furry little marsupials either way. It’s not even the only set of words we have with a one-letter difference: