How to Easily Identify Nouns and Verbs

Nouns and verbs are two very important parts of speech. But what is the difference? Learn to easily identify a noun vs. a verb by getting a clear definition. View different types of nouns and verbs used in examples too. Soon, you’ll gain a clear understanding of whether a word is a noun or a verb. 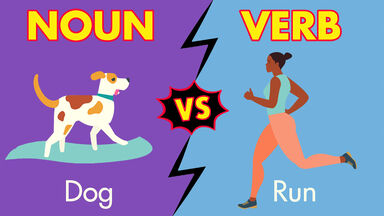 You couldn’t have a sentence without nouns. They are one of the basic building blocks of the English language. A noun is defined as a person, place, thing or idea. Examples include child, house, door and love. The list of nouns can go on and on, and they are singular, plural and sometimes, both! If you don’t believe it, ask the deer.

Can you find the nouns in the sentence below?

When it comes to nouns, there isn’t just one type. There’s a lot of them. Explore what they are and view a few examples of each.

Definition of a Verb

Verbs are just as important as nouns. You couldn’t have sentences without them either. By definition, verbs are going to indicate or describe the action happening in a sentence. They tell you what a noun does.

Can you find the verbs in the sentence?

This sentence uses the verbs raked and hit. These are the “action” words in the sentence. Verbs can also be non-action words, like those used to express being.

Nouns aren’t the only words that can be split into subgroups. Verbs can too. Check out the different subgroups of verbs.

Now that you have a clear idea of what a verb and a noun are, explore how they work together in a sentence through examples. Notice the bold nouns and the italicized verbs.

Just when you think that you have a handle on nouns and verbs, it’s time to throw you a curveball. Some nouns can be verbs. Actually, several nouns can also be verbs, spelled exactly the same way. So, how do you tell? When you say the sentence, listen to where the stress is placed on the syllable.

See how that works! Check out a few more examples to really get the hang of it.

Nouns and verbs might be different, but they are both necessary. Knowing the differences between the two can make you a stronger English speaker and really improve your sentence structure. Now, it is time to master possessive pronouns. The challenge is yours to conquer!