What Is the Plural of Octopus? Settling Octopi vs. Octopuses

Octopuses have arms for days, three hearts, and a penchant for using tools to eat delicious sea meats. They shoot out ink, and they reportedly have more neurons in their arms than in their squishy heads. All of these amazing traits, but for some reason, the most enduring debate about these wet spiders is what they’re called in plural, octopuses or octopi. 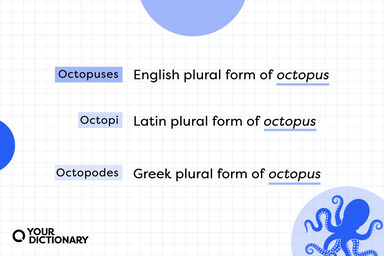 Octopus With Octopi vs Octopuses vs Octopodes Definitions
Advertisement

When you first learn English, the general rule to create a plural is to add an “s” to the end of the word. And then you realized that not all plural nouns are that simple. Some words change entirely (goose becomes geese), while other words, like those that end in “s,” require a little extra.

The general rule for pluralizing words ending in “s” is to add -es. For example:

That’s how you get from octopus to octopuses.

Octopi vs. Octopuses: Which Is Correct?

Octopuses is a perfectly valid plural form of octopus, and for some people, it’s the preferred plural form. Both the AP Stylebook and Guardian style guide prefer octopuses.

However, other people insist on octopi as the plural form. Here’s why. Although it technically came from Greek, octopus is considered to originate from Latin. Many linguists and general word nerds believe that words with a Latin root should have a Latin ending, thus octopus becomes octopi (äk-​tə-​ˌpī). You can see a similar thing in:

Although you might be eager to add as many s’s as possible to a plural form of a noun, adding -ses to form a plural of a word is exceedingly rare, especially if that word already ends in “s.” You would otherwise get words like walrusses, massses, or abacusses, which is just too many s’s for anyone’s comfort.

Remember that technicality about octopus originating from the Greek language? The original word oktopous combines okto- (meaning “eight”) and -pous (meaning “foot”). Thus, with a plural form of the word, you’re modifying the Greek ending -ous, not the Latin ending of -us. This gives you the technically-correct-but-uncommon octopodes (ok-toe-puh-deez or ok-tah-puh-deez).

How We Got to "Octopi"

Octopi is a classic example of hypercorrection, which is an incorrect pronunciation or grammar usage based on the incorrect application of language rules. It’s essentially overcorrecting language when you don’t need to, which is how you get rhinoceri instead of rhinoceroses or between you and I over the standard between you and me.

This mostly goes to show the strangeness of the English language, and the fact that no one should be giving you trouble about your preferred plural form of octopus.

Octopuses, octopi, and octopodes are all perfectly valid. If you’re in doubt, stick with octopuses, but if you really need to save a few characters, octopi is fine.