Of vs. For: Differences and Proper Grammar Use

The words of and for are commonly used prepositions with very different sounds. Despite their differences, many people get them confused in sentences. Once you learn the subtle differences between of and for, you’ll know exactly when to use each word. 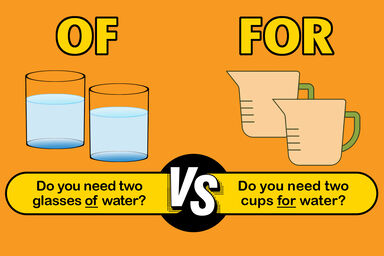 of vs for proper grammar
Advertisement

Since of and for are both prepositions, you can’t differentiate them by part of speech alone. A preposition is a relationship word that links verbs, nouns, pronouns, and phrases together in one sentence.

Before you can use these prepositions properly, you need to know the rules for prepositions. The rules that apply most to the use of for and of are:

A preposition like of or for can end a sentence if it needs to be there for the sentence to make sense.

What Does Of Mean?

There are several similar ways to define of. In general, the word of is defined as:

Of is used for something that belongs to or relates to something else or to reference something.

Examples Using Of in a Sentence

Keep in mind that of should always be followed by a noun or a pronoun since it is a preposition.

What Does For Mean?

Like of, there are many similar ways to define for. In general, the word “for” means:

The purpose/reason, destination, recipient, or amount of something

Examples Using For in a Sentence

Keep in mind that for usually indicates a purpose.

Comparing Of vs. For Usage

Now that you have a good idea what each word means, take a look at how using of or for interchangeably can change the meaning of a sentence.

The Of vs. For Difference

While using of and for interchangeably might sound okay sometimes, it’s usually not the proper way to use the prepositions. Check out more preposition examples to help you see how to use words like of and for. You can also test yourself with preposition worksheets and preposition games.