Offense vs. Offence: Why Are They Spelled Differently?

Do you take offense to something or take offence? Do you commit a criminal offense or offence? This is a trick question because ultimately both are correct. 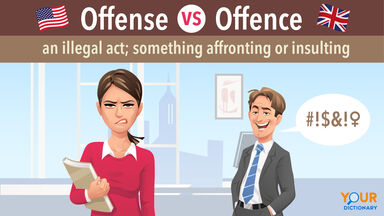 The Difference Between Offense and Offence

As with other words that end in -se or -ce, the difference comes down to if you are using American or British (also known as Commonwealth) English. Offense is favored in American English while offence is the preferred spelling in British, Canadian, Australian, and New Zealand English.

Using Offense and Offence in Context

Offense and offence are two spellings of the same noun that have the same meaning. They are defined as “an illegal act,” “something that offends or outrages” or “a state of being insulted.” Both words are pronounced oh-FENS with stress on the second syllable. In sports, offense or offence refers to "attacking or engaging the opposing team to score points." When you use this version of the term, put emphasis on the first syllable (AW-fens).

Tips to Remember the Difference

Offense is spelled with an “s,” which you can associate with the "s" in U.S. where the -se spelling is used. The “c” in offence can also stand for commonwealth, which are the countries that use the -ce spelling.

Differentiate Between American and British Spellings

One of the best ways to become a proficient speller is learning to differentiate between American and British spelling standards. A common spelling mistake to keep in mind is the difference between words ending in -se and -ce like offense and offence or practice and practise. Another common difference is -se and -ze endings as seen in words like realise and realize.