Okay is one of those amazing words that has incredible utility. It’s a way to let people know you’re feeling fine, it’s a filler word for when you need to take a minute to think, and it’s a whole sentence on its own. But okay, is it okay or OK? Turns out, both are just alternate forms of the same word. 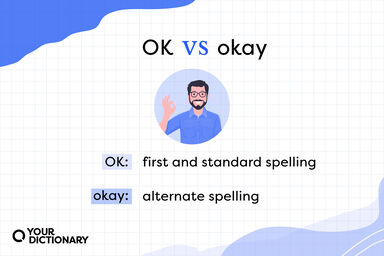 definitions of OK and Okay from the article
Advertisement

Both okay and OK (pronounced “oh-kay”) are grammatically correct and perfectly interchangeable. Unlike other words that might depend on regional variations, there aren’t any real delineations for who uses what word. It’s not a difference between American English and British English. It all comes down to personal preference.

There isn’t really any judgment about which one you use. They are both standard English. Most dictionaries will point you back to OK, but that’s purely because it’s the older version of the two.

Despite their simple spelling and pronunciation, okay and ok can be surprisingly complex in their usage, thanks in part to the fact that they cover nearly all parts of speech.

The one exception: OK is also the state abbreviation for Oklahoma.

Okay is a pretty straightforward word to use. If OK is your preferred form, it should be fully capitalized, though, if you write ok to a friend, it’s totally fine.

It’s worth noting that both okay and OK are fairly informal in their usage. That means that if you’re writing a paper or other formal piece, you might want to avoid okay or OK entirely. You can switch to fine, good, or even all right.

If you absolutely need to use it, be aware of the style guide that you have to follow.

O.K. is technically grammatically correct, and the word did start as an abbreviation. However, you don’t need to place periods between the letters, like O.K. or o.k. The word has progressed beyond the need for periods. Typing out O.K. just takes more time and characters, and the reader will totally think you’re weird.

OK is actually the original form of the word that first appeared in 1839 as an initialism of the phrase oll correct or orl correct, a humorous variation of all correct.

This was then popularized a year later in 1840 as Martin Van Buren was running for president. Van Buren’s nickname at the time was Old Kinderhook (Kinderhook is Van Buren’s town of birth in New York). This gave way to the O.K. Club, a central organizing committee for Van Buren and the Democratic Party.

The exact origins aren’t well known, but okay likely came as a phonetic spelling of OK. In 1919, Woodrow Wilson tried to push okeh as a spelling of OK under the assumption that it came from the Choctaw word oke, meaning “it is.” However, there’s no actual documentation of that word existing in Choctaw.

Variations on “OK” and “Okay”

Considering OK and okay have been around for so long, they’ve naturally spawned a handful of variations that generally mean the same thing.

Okey-doke, okey-dokey, and the occasional okey-dokey-artichokey are all just playful, even more informal variations on okay and OK. While the meaning and usage is generally the same, okey-doke can also be used as slang to mean nonsense, foolishness, or some sort of trick or deception.

An even more elaborate take on okey-doke, okily-dokily is the standard catchphrase for Ned Flanders, neighbor to the Simpsons. It’s a definite idiosyncrasy (in canon, it’s a result of an intensive treatment in Ned’s childhood that left him with severe anger repression issues) that isn’t particularly common otherwise.

A-OK and A-okay were initially popularized by astronauts as an abbreviation for all systems okay. Today, it has everyday, colloquial usage to mean that everything’s perfect.

Oke (pronounced “oak”) is a clipped, single-syllable version of OK and okay, but it’s not particularly common today.

But fear not! If you’re looking for a single-syllable form of OK or okay, ‘kay is here to save the day.

You’ll mostly see this in texts. Even though it’s said exactly like ‘kay, it feels awfully short. It might save you the half second of typing out ok, but to most readers, a K in a text will almost immediately be met with thoughts of “Am I bothering them? Did I do or say something wrong? Are they mad at me?”

Save your textee and yourself the trouble. Most of the time, you probably don’t need to say anything. If you do want to send the equivalent of “I have seen and received your message, but don’t want to respond or have anything to say,” a thumbs up emoji is almost always more preferable and naturally friendlier than a k.

Words That Look Like But Aren’t “OK” or “Okay”

Thanks to the diversity and confusing nature of the English language, it’s really easy to mix up OK and okay with a bunch of other words.