Have you ever been called a nerd, geek or dork? If so, you may wonder two things: a) should you be insulted? and b) what’s the difference? Although these terms may have once conjured images of bespectacled, awkward Star Wars fanatics, nerds, geeks and dorks have reclaimed these words as sources of pride. In fact, geek is chic, dorks are adorkable and anyone can be a proud nerd about something they love. 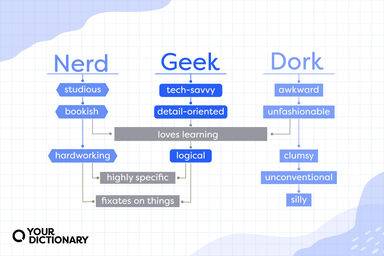 Are You a Nerd, Geek or Dork?

You may use nerd, geek and dork interchangeably, but call a nerd a geek or a geek a dork and they probably won’t appreciate it too much. All of these words describe someone who is really passionate about something, and who cares about semantics? Nerds, that’s who!

Do You Call Yourself a Nerd?

The word nerd stereotypically refers to someone who is highly intelligent and typically obsessive, introverted and/or lacking in social skills. Ultimately, though, to be a nerd just means that you love learning. Take for instance Hermione Granger from Harry Potter who messed with time travel because she wanted to take more classes or The Magic Schoolbus’s Miss Frizzle who loves learning so much she coordinates every outfit with the subject of the day. You also might be a nerd if you know what TARDIS stands for or if you have particularly strong opinions on Star Wars, Star Trek or any other media that may or may not have “star” in the title.

How Nerd Came To Be

The word nerd began as a variation of the term nert (itself a variant of “nut”) — meaning "stupid” or “crazy.” Dr. Seuss used the word in his children’s book If I Ran the Zoo (1950). Here, a nerd is a creature in an imaginary zoo. In the 1950s, nerd became slang for “dull,” and the term continued to evolve over the following decades. Nerd’s popularity was solidified in the 1970s through its repeated use in the sitcom Happy Days.

Revenge of the Nerds

Do you like The Hitchhiker’s Guide to the Galaxy or Star Trek, or do you ever watch Vlogbrothers on YouTube? Well, guess what, the creators behind these properties are massive nerds — just ask them! In fact, one of the things these great minds attribute their success to — besides just being plain talented — is that they embrace their inner nerd.

The Geek Shall Inherit

If nerds are the people who just love knowledge, geeks are the ones who take the old adage “knowledge is power” to the next level. Geek describes a person who is an expert in a field such as science or technology and/or who is intensely interested in niche or non-mainstream things. Think tech moguls like Elon Musk and Bill Gates, the leads from The Big Bang Theory or the everyday persona of your favorite superheroes like Peter Parker and Bruce Banner.

Where Did Geek Come From?

The root of the word geek can be traced back to the German geck, which means “fool” or “freak” and the Dutch and Afrikaans gek meaning “crazy.” In the 19th century, geek was used in English to refer to a person in a traveling “geek show” or “freak show.” The meaning of geek changed in the 1980s when the computer revolution was in full swing to describe smart, tech-savvy people. Like nerd, the term geek has evolved in the 21st century to describe anyone who is highly enthusiastic about something.

What Do Geeks Think?

Geeks tend to be fiercely intelligent and proud of it, and that’s probably a big reason why they tend to go the extra mile.

Originally in the 1960s, dork meant “silly person” and was a less offensive version of di*k. In its current meaning, a dork is considered an annoying version of a nerd who has no social skills or who fixates on things to the point of frustration and isolation for others. More recently, however, dork can have a more positive connotation and be used synonymously with nerd or geek.

People Who Consider Themselves Dorks

Even rock stars and movie stars can be dorks. In fact, you could argue that’s what makes them so cool.

One of the key traits that nerds, geeks and dorks share is learning a lot about a lot. Expand your knowledge on niche topics for the sake of learning (or to stump your family members with random trivia at your next gathering).