Over vs. More Than: Everyday Use Made Easy

For years, writers and editors were careful not to use over when they meant more than. But, you may be surprised to learn that keeping these terms distinct from each other was never an official grammar rule. Learn whether you can use over and more than interchangeably – or whether you should still follow the old guideline. 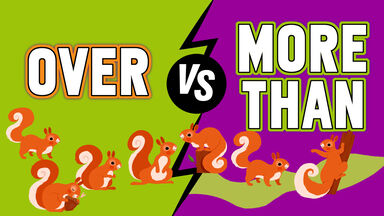 over vs more than
Advertisement

Over and More Than Definitions

Editors prefer more than when discussing quantities because over is more commonly used as a preposition. When writers use over to indicate an amount over a specified number, some believe that it could be potentially confusing to readers.

Examples of More Than

More than can describe amounts of anything. It modifies nouns, including money, liquid, people, objects, or anything else that can be quantified.

Over is a preposition. It describes an object’s position as above or on top of something. Its meaning is usually literal, but when it's used to replace more than, it can mean figuratively “above” an upper limit.

Here are the same sentences with the word over:

The only difference in these sentences is a less formal tone. More than is appropriate for formal writing or professional settings, while over is a more conversational choice.

William Cullen Bryant was the editor-in-chief of the New York Evening Post for 50 years. In 1877, he instituted the rule that his writers could not use over in place of more than when talking about quantities. Even though Bryant's rule was not based on adherence to a style guide, the distinction between over and more than became common practice in American writing.

In 2014, the AP Stylebook announced that using either over or more than to describe quantities is acceptable. Writers who preferred Bryant's traditional wording declared their displeasure with this announcement with the humorous headline “More Than My Dead Body!” Today, the matter of over and more than is a matter of personal preference, not style guidelines.

You can use over when you are describing a quantity without obscuring understanding. However, it gets tricky when you use more as a modifier to compare something to something else.

These situations would not sound right with the word over. Additionally, sentences that use over as a preposition to describe physical positioning don’t sound right when replaced with more than.

Basically, if you’re describing a quantity that exceeds a limit, more than or over is fine. But, if you are comparing two nouns or phrases, stick with more than. Likewise, if you want to describe the location of something, use over.

English is full of nuanced differences that are easy to mix up. Learn how to choose between many and much with a helpful article. Or, delve into words that sound the same with some examples of when to use of versus for.