Paramount vs. Tantamount: The Important Difference

“This information is of tantamount importance,” says the spy to his informant. The informant nods solemnly, but inside, he’s wondering if the spy said tantamount when he should have said paramount. If you’ve ever mixed up tantamount and paramount, you and the spy should take a moment out of your mission to get these tricky words straight. (Also, he shouldn’t be saying paramount importance at all, but we’ll get to that later). 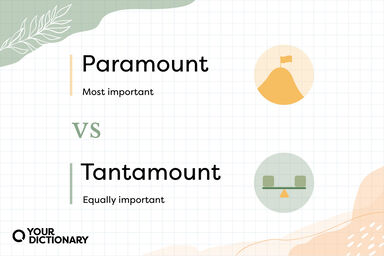 Mountain And Scale With Paramount vs Tantamount definitions
Advertisement

The word tantamount means that one item is just as important as another, but not more important. It comes from the Latin tantus amonter (“to go up together”), which also influenced the Italian tanto montare and French tant amunter (which both mean “amount to as much”).

Think of the words tandem (“together”) and mountain, and you’ll think of two mountain climbers climbing at the same rate. Neither of them are more important; they both need to get to the top.

Using Tantamount in a Sentence

The adjective tantamount (or tantamount to, as you’ll typically see it written) is synonymous with “equivalent” or “the same as,” particularly in legal writing. For example:

When something is paramount, it’s the most important thing of all. It comes from the Old French paramont (“above”) and relates to the Latin phrase per ad montem (“up the hill”). If tantamount involves two mountain climbers moving together, paramount represents the paraglider way above them.

Using Paramount in a Sentence

You can use paramount as a predicate adjective to describe something as having the highest priority. For example:

You can also use paramount as an adjective before a noun:

Should You Say ‘Paramount Importance’?

If you’re using the phrase for tautological effect, then go for it — but if you’re trying to say “very important,” just use paramount instead. Or try another adjective to vary your writing style (though you’d be hard-pressed to find a better one than paramount).

A Good Vocabulary Is Paramount

Nothing’s more important that communicating your message effectively, and a strong vocabulary can do that. Clear up any additional misunderstandings with: