Patriotism vs. Nationalism: Differences Made Simple

People sometimes use the words "patriotism" and "nationalism" as if they mean the same thing. They do not. At the most basic level, patriotism is a form of national pride. The phrase "national pride" isn't that far off from the word "nationalism," but these words are worlds away in terms of meaning. Discover the differences between patriotism vs. nationalism. 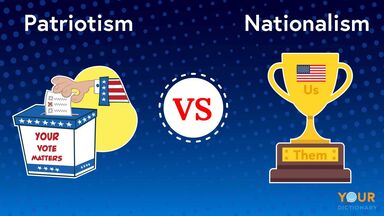 What Does Patriotism Mean?

There are records of the English word patriotism being used as far back as the 17th century. The term derives from the Latin word patriota, which means "fellow countrymen," paired with the suffix -ism. Adding -ism to a word creates a related term that refers to a particular philosophy or way of thinking or acting. Therefore, the term patriotism refers to the pride, loyalty and love a person feels for his or her own country. It is a form of national pride.

People sometimes express patriotism verbally or via symbols that represent the country. A person who is patriotic feels strong support for his or her country and government as a whole, yet remains open to acknowledging problems or wrongs that may need to be righted. There are many examples of patriotism in history and modern times.

What Does Nationalism Mean?

Don't mistake national pride for nationalism. Nationalism has some elements in common with patriotism, but it is not the same. The term nationalism has only been used since the late 18th century, during which time it was used interchangeably with the word patriotism. However, over time, the words have evolved to mean different things. Nationalism is grounded in positive feelings and loyalty towards one's own country but also espouses the belief that one's own country is always better than others.

Rather than being a philosophy or way of thinking, nationalism has come to often be associated with a political approach in which a particular group seeks to establish their cultural practices or beliefs as the country's official governmental policies. One example is what is being called Hindu Nationalism in India, even though the country's government is officially secular. There are many examples of nationalism around the world.

Understanding the Difference: Patriotism vs. Nationalism

While patriotism and nationalism are both rooted in pride for a country, these concepts differ in important ways. The nationalist's mindset is my country, right or wrong, whereas someone who is patriotic without also being a nationalist remains proud of his or her home country without insisting that every other country is bad or wrong.

Now that you understand the difference between patriotism and nationalism, you can make an informed decision about where you stand and what your beliefs really are. It's important not to use the term nationalism when what you really mean is national pride or patriotism (and vice versa). Now that you're clear on the meanings of these terms that are closely related to politics and government, take the time to learn more about these topics. Start by adding some political jargon to your vocabulary. Then, explore different types of democracy.