In a financial transaction, you have a payor and a payee. But which is which? And which are you? Explore the meanings, uses and applications of payee and payor (and payer). 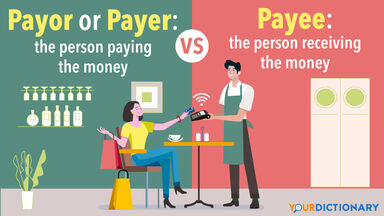 Payor and Payee: The Definitions and Differences

The terms payer and payee both refer to financial exchanges. In this case, one person performs the action of paying and the other receives the payment.

Meaning and Usage of Payor

A payor is a person paying money to someone else. They can also be called payers, which is an alternate spelling. The payor buys products, services or other items from the payee or is a debtor who owes money to the creditor/payee.

Should You Use Payor or Payer?

The payor and payer spellings are both correct and are used interchangeably. Both spellings indicate that someone is making a payment. Typically, the -er suffix is more common in English, due in large part to the Germanic roots of English. The suffix -or, however, comes from Latin. It is usually found in professional titles like doctor, pastor or author.

English tends to apply the -or in the same way Latin does, but in some cases, both -or and -er are correct, such as payer and payor. Generally, the -or ending is preferred in formal situations such as legal writing, while the -er suffix is commonly applied to a person or thing that performs an action.

How and When to Use Payee

A payee is a person who receives money from someone else in a financial transaction. In other words, they are the ones selling goods or services to the payor or payer. Therefore, these words are antonyms because they refer to opposite things. You use payee in a sentence when you are referring to someone who sells products, a creditor or the recipient of a payment.

Pay Attention to the Differences

Sometimes subtle differences in spelling or similar words can be easy to mix up. Antonyms like payer and payee and similar-looking words are confused because they have the same root words but ultimately mean different things. On the other hand, words like peek, peak and pique may sound the same but have unrelated meanings.