Peek vs. Peak vs. Pique: Quick Comparison of Their Differences

When faced with choosing from the words peek, peak and pique, it's easy to get overwhelmed. Learn the meaning of each term so you'll be clear on how to interpret texts that include these terms and be able to choose the correct word to use in your own writing. 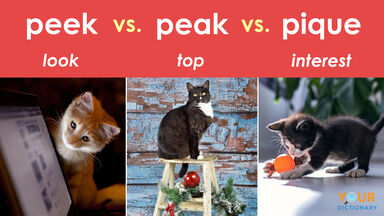 images of cats demonstrating peek versus peak versus pique
Advertisement

Peek vs. Peak vs. Pique: The Difference in Definitions

Peek, peak and pique are homophones, words that sound the same (pēk) but have different spellings and meanings. In order to distinguish between them, it’s important to memorize their definitions.

Meanings and Usage of Peek

The word peek can be a noun or a verb. Both forms involve looking at something.

How to Use Peek as a Verb

The verb peek means the action of looking at something quickly, either in a furtive way or simply to briefly skim something.

How to Use Peek as a Noun

The noun form of the word peek refers to a brief look or glance, separate from the action of looking.

Meanings and Usage of Peak

The word peak can be a noun, adjective or verb. With each part of speech, the meaning is "the top or pinnacle." The meaning depends on whether the word is used for an action or to describe an object.

Using Peak as a Verb

Used as a verb, the word peak refers to the action of moving toward or reaching the highest possible state or maximum value.

Using Peak as a Noun

Used as a noun, the word peak refers to the top or highest point of something, literally or figuratively.

Using Peak as an Adjective

When used as an adjective, the word peak describes a noun as having reached its maximum state.

The word pique can be a noun or a verb. There are a few different meanings within each usage.

Using Pique as a Verb in a Sentence

When used as a verb, pique can refer to arousing or stimulating interest or curiosity. It can also mean to arouse or provoke anger or resentment.

Using Pique as a Noun in a Sentence

When used as a noun, the word pique refers to a feeling of irritation, resentment or of having one's pride wounded via an insult or slight. When written as piqué ( pronounced pē-kā), this word refers to a ribbed fabric.

Remember the Difference: Peek vs. Peak vs. Pique (vs. Piqué)

Reviewing definitions and example sentences is a great way to learn key differences between peek, peak, pique, and piqué. It can also be helpful to discover some simple memory tips and tricks that can help you quickly recall what each word means.

Now that you know how these words differ from each other, discover other commonly confused words. Start by exploring more examples of homophones. Then, review some examples of homographs. The more you learn, the stronger your vocabulary, language arts and writing skills will be!