Persons vs. People: Understanding When To Use Which

Is persons a word? Shouldn’t it be people? The terms people and persons are both plural forms of the word person, but they’re not used in the same situations. People is generally the correct term to use when referring to more than one person — but there are a few important exceptions when you should use persons instead. 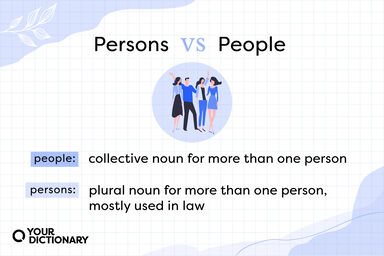 Group of people With Persons vs People Definitions
Advertisement

When To Use ‘People’

The word people refers to more than one person. It comes from the Latin populus and Anglo-French peple, meaning “a population of humans,” and appeared in English in the 14th Century. Like all collective nouns, people uses singular verbs, even though it describes more than one person.

People is much more common than persons. Unless you work as a police officer or write contracts or public notices, people is likely the only word you need to refer to more than one human being.

Use ‘People’ With Multiple Individuals

The word people is almost always the correct term when referring to more than one human being. In this context, people is the plural form of person.

Use ‘People’ in a Collective Reference

The word people is appropriate in collective references to groups of individuals, such as the citizens of a particular country or members of a recognized group. In this context, the word people is being used as a collective singular noun rather than the plural form of person.

Use ‘People’ in Criminal Case Citations

This collective noun people also appears in criminal charges. In criminal proceedings, the prosecutor is working as a representative of the jurisdiction (or “the people”) in which they serve. The wording for such cases is The People versus (v.) Defendant Last Name. For example:

When To Use ‘Persons’

So why do we still have persons if people is the plural form of person? The answer lies in the word’s origin. It comes from the Latin persona, meaning “a mask or character,” and the Old French persone.

Person (and persons) appeared in English around the same time as people, and was a preferred way to refer to more than one person for centuries. Some argued that because people could refer to two or two million humans, it wasn't as descriptive as persons. But the popularity of people eventually won out. Today, you’ll see persons in the context of law enforcement, written contracts or other legally binding documents.

Use ‘Persons’ With Law Enforcement

Use ‘Persons’ in Legal Documents

In legal terminology, the word person isn’t limited to human beings. It also includes “a non-human entity that is treated as a person for limited legal purposes,” such as a corporation or other type of business. Additionally:

Use ‘Persons’ in Public Notices

Public notices issued by a government entity as part of a legal proceeding are written in a very formal manner that includes legalese, so the word persons is often included.

Just when you’ve got people and persons figured out, you’ll find peoples mentioned somewhere, most often in sociology or anthropology. Peoples refers to more than one group of people who live in the same geographical area, as in:

Like persons, peoples has such a specific context that you’re not likely to see it anywhere else. That’s why people is most often the preferred choice in both casual and formal writing.