Phenomenon and phenomena are clearly related words, but what do they mean? Which form of the word is singular and which is plural? 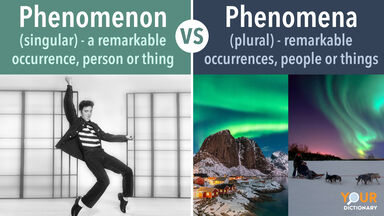 Meaning and Origins of Phenomenon and Phenomena

Phenomenon and phenomena are words of Greek origin that mean “something that can be observed or studied.” They come from the Late Latin word phænomenon, which itself is derived from the Greek phainomenon meaning "something that appears or is seen." Since the 18th century, it has been used to mean “a remarkable natural occurrence” that can be observed or “a remarkable person or thing.”

Using Phenomenon in a Sentence

The word phenomenon can describe a natural, psychological or cultural occurrence. For example, anything in nature can be classified as a phenomenon. Phenomenon can also be used to describe an individual or collective medical or psychological condition as well as a popular piece of entertainment, person or group.

Usage and Meaning of Phenomena

Phenomena is the plural form of phenomenon. You use this variation when you are referring to multiple things or occurrences. It usually applies to science or nature, as well as observable sociological or philosophical events or occurrences.

Clear Up the Confusion: Singular and Plural Words

Words of Latin or Greek origins like phenomenon and phenomena often have atypical endings that indicate whether the word is singular and plural. Review similar terms such as criterion and criteria or curricula and curriculum.