Pore vs. Pour: Reflecting On Which One to Use

If you want to clean up your writing, poring over grammar articles is a good start. But wait — shouldn't that say "pouring over"? Both words are correct in different contexts, but only one means "to look over intently." 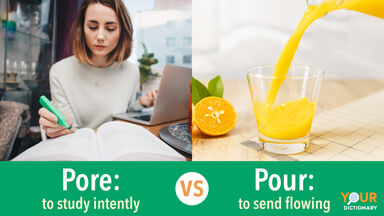 Straightening Out Pore vs. Pour

Pore and pour are homophones because they sound the same, even if they're spelled differently. Both words can be used as nouns, but it's their verb forms that really confuse people.

If you've never used pore as a verb before, surprise! That's the right word to use when discussing deep concentration.

Is It Pore Over or Pour Over?

The most common misunderstanding between pore and pour is the phrase pore over ("I pored over my textbooks.") It looks incorrect to many readers because they know pore is a noun, and they can visualize pour more easily, such as figuratively pouring knowledge over something. However, pour only relates to sending liquid or crowds flowing; pore's verb definition describes close attention to detail.

Pore Meaning: To Look Over Intently

Have you ever been so absorbed in a book that you couldn't lift your eyes, even for a moment? Or maybe when finding a small detail within a dense document, you had to comb through every sentence? That's what pore means as a verb: "paying close attention or reading something intently."

Examples of pore in a sentence include:

Pore as a Noun

If the above sentences look odd to you, you may be used to using pore as a noun. In an anatomical context, pore means "a small opening" and can relate to anything porous, including pores in your skin or pores in a sponge. For example:

Don't pour over your favorite book — it might get wet! The verb pour relates to sending something flowing, whether it's liquid ("pouring coffee") or a crowd ("we poured into the theater"). It's more common than pore, but it only relates to this specific definition.

Examples of pour in a sentence include:

Pour as a Noun

A less common (but still proper) use of pour is as a noun. This usage often refers to pouring wine, but can also relate to heavy rain (a downpour). For example:

One more word in this set of homophones is poor, meaning "without money" or "in grave condition." It sounds the same as pore and pour, but is not often mistaken for these two because it has no verb form. You can use poor as an adjective ("The poor family asked for help") and as a noun ("Please donate money to help the poor.")

Soak Up the Difference With a Memory Trick

Are you more of a visual person? If so, knowing the definition of pore vs. pour may not be the most intuitive method for you. Try imagining yourself soaking in the knowledge from your book or document, just like a sponge in a sink of water. You're so absorbed in the knowledge that it's soaking into your pores. And there it is — you've found pore instead of pour!

Pore Over Your Writing

Mixing up similar-sounding words such as pore and pour is very common and easy to do. But that doesn't mean your writing has to be incorrect! If you're interested in improving your writing and word choice, check out: