Practice vs. Practise: Getting the Difference Down 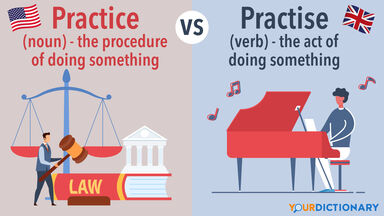 The Difference Between Practice and Practise

In British English, the spelling correlates to the following meanings:

How to Use Practice in British English

The spelling practice refers to the noun form in British English, which is the "application of an idea" or "way of doing something." It can also refer to the establishment of particular activities or professions, such as medicine, law, sports, and business.

How to Use Practise in British English

Practise is a verb meaning “to perform an action” or "to exercise a skill.” This spelling is used in British, Canadian and Australian English. In contrast, American English spells the verb form practice.

How Practice Is Used in American English

As previously stated, practice is the only spelling in American English. It applies to both the verb and noun meanings.

In common phrases like “practice what you preach,” the question of whether to use practice or practise seems unclear. In this instance, if you’re using British English you use practise because it is a verb.

What about "best practices" or "best practises"? This phrase refers to a series of guidelines, steps or ideas. In this case, the correct spelling is "best practices" because you are referring to the procedure, not the action itself.

Regardless of how you spell practice or practise in your country, it is important to become familiar with spelling standards and differences between British and American English. Review words with commonly confused spellings, such as toward and towards or while and whilst.