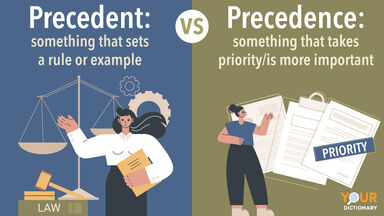 The Difference Between Precedent and Precedence

Precedent (PRES-ih-dent) and precedence (PRES-ih-dense) look like two forms of the same word, but they have distinct meanings. Both come from the Latin word praecēdēns, which means “a person who goes in front or ranks above.”

It is unsurprising that the words are sometimes confused because they used to be synonyms. Precedence may have potentially been a misspelling of precedent initially, but became its own word with a distinct meaning over time. The English word precedence is also likely to have derived from the French précédence meaning “priority” or “something of importance.”

Meaning and Usage of Precedent

Precedent is a person, thing or event that sets an example, whether positive or negative. In legal terms, a precedent is a previous case or ruling that must be followed in other such cases.

To complicate matters further, the plural of precedent is precedents, which sounds exactly like precedence. Precedents has the same definition as precedent and is used to refer to earlier events or decisions that are regarded as examples of how something should be done in such circumstances.

Precedence means “priority” and is usually paired with verbs like have, take or give.

Another similar-sounding word that you may mistake with precedent or precedence is president (PREZ-ih-dent). President has a different Latin origin and comes from the word praesidere, which means “head" or "chief” and praesidēre meaning “to preside over.” The word president refers to the head of a nation or organization. While the similar appearance and meanings can lead to confusion between precedent, precedence and president, you can remember the difference by remembering their spellings.

With so many similar-sounding words, it is understandably easy to mix up the spellings or even the words themselves. To remember the difference, recall these simple tricks.

Give Precedent to the Correct Word

Choosing the right word is often difficult, especially where they sound the same and look similar but have different meanings. Sometimes words have two alternate spellings, but often these are separate words with distinct definitions. Brush up on the meanings of other words that sound similar, such as council and counsel or stationary and stationery.