Preform vs. Perform: Comparing Meaning and Use 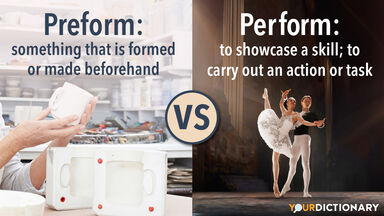 Definitions Help You Remember the Difference

While spellcheck may lead you to believe that perform is the correct spelling, preform is a separate word with its own definition and usage.

How to Use Preform in a Sentence

Preform refers to something that has already been made or formed, typically an object in a particular shape or pattern. The term originates from the Latin word praeformare which means "pre+formed." While it is not the most common term in daily usage, preform is most commonly used in construction work. Additionally, PreForm is the name of a 3D printing software.

Meaning and Usage of Perform

The verb perform means "to carry out an action" or "to display one’s skills in something." The word perform comes from the Old French parfournir which is a combination of par (through) and fournir (furnish or provide).

Tips to Remember Preform vs. Perform

You can remember the difference between the words because preform is related to preliminary, which indicates an event or action that comes before another or something that is done for preparation or introduction. They also both have the prefix pre- which means "before." On the other hand, the prefix per- means "through." You can think of "we ran through the performance" to remember this.

Sometimes getting the arrangement of letters wrong or adding or dropping a syllable can completely change the word. That is why it is important to memorize their spellings and definitions. Explore other commonly confused prefixes such as intra- and inter- or hypo- and hyper-.