Premier vs. Premiere: An Important Distinction

You've just gotten an invitation to an exclusive movie premiere! But wait — shouldn't that be premier? How can you choose between premier and premiere, and why does it matter? The difference between these words is simpler than you may think. 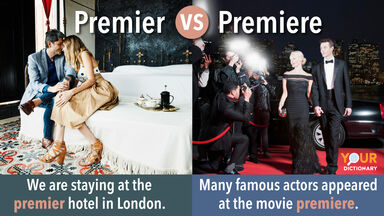 Premier and Premiere Have Different Meanings

Often, both premier and premiere look correct in the same sentence. But their meanings are different enough to watch your spelling more closely.

If you're thinking that these definitions actually look pretty similar, you're not the only one. While premier can describe any noun from a political leader to a dry-cleaning business, premiere only refers to a public performance. You can also use premier as an adjective, but not premiere.

Premier Means Best or Most Important

The word premier refers to the noun with the highest rank in a category or a noun that is leading or best amongst its competitors. You can use premier as an adjective to describe any noun, or you can use it as a noun when referring to a head of state.

Using Premier as an Adjective

When you see premier used as an adjective, it's describing the top-ranking person or item in a group. For example:

Using Premier as a Noun

The noun function of premier is similar to its adjective form. As a noun, premier means "the leader" or "the top-ranking official," typically of a country. It comes from the French term premier ministre ("prime minister") and is often used interchangeably with prime minister. Modern titles use premier to differentiate province, state and territory leadership with national leadership.

Examples of premier used as a noun include:

The word premiere comes from the French phrase première représentation ("first showing"). It's exclusively used to describe the first public performance or showing, especially in visual arts. Premiere functions as a noun when discussing the performance itself and as a verb when referencing the act of bringing a show to the stage.

Using Premiere as a Noun

A premiere can be the first public showing of a movie, the first performance of a ballet or the opening night of an opera. For example:

Using Premiere as a Verb

When you're talking about the act of performing something for the first time, you can use premiere as a verb. For example:

The Roots of Premier and Premiere

Although both words start with pre-, that's not their root. Premier and premiere share the Latin root prim-, meaning "first," along with the following words:

Understanding the shared roots and meanings of these words can help you remember the definitions of premier and premiere. Just remember: like primary, both words mean "first" in different ways.

Become the Premier Grammarian Around

Word choice doesn't have to come down to spelling errors. If you can tell the difference between confusing word pairs such as premier and premiere, chances are that your writing is clear and understandable for your readers. Once you've mastered these words, move on to other similar-sounding words with French origins such as moral vs. morale.