Proceed vs. Precede: Step Towards the Right Usage

It’s understandably easy to confuse proceed and precede. After all, they look and sound similar, so it’s only natural to assume the terms are related. In fact, they are opposites. Discover the difference between proceed and precede, as well as their origins, meanings and uses. 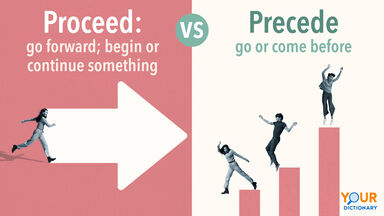 Proceed and Precede: The Difference Defined

While proceed and precede look and sound similar, they are distinct words with different prefixes and meanings.

Meaning and Usage of Proceed

Proceed means “to begin or continue with something.” The word is derived from the Old French proceder, which itself comes from Latin procedere meaning “to advance or go forward.” In this context, the prefix pro- means “forward.” Proceed is a verb used to indicate the action of continuing or moving forward.

How to Use Precede in a Sentence

Precede is a verb derived from the Latin word praecedere, which is made up of prae (“pre”) and cedere (“to go”). The prefix pre- means “prior to” or “earlier than.” Therefore, precede means “to go or come before.” This can apply to either time or place. It can also mean to come before in rank, order or importance.

There are actually a couple of different ways you can use proceeds. On one hand, proceeds is a form of the verb proceed that means “to continue.”

On the other hand, the noun proceeds refers to the money obtained from an event or activity, usually to do with business or charity.

Proceed to the Correct Word

There are many words that can easily be confused because they look or sound similar. For example, conscience and conscious or gage and gauge may look related, but they have different meanings and uses. Review and memorize these terms so you can always choose the correct word.