When your doctor gives you a prognosis, it's different than when they give you a diagnosis. One isn't necessarily better or worse than the other, but you need both. Knowing the difference between a prognosis and a diagnosis can help you better understand your medical condition — and it may even help in your recovery. 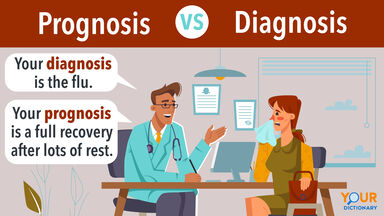 Patient With Flu Listening to Doctor Prognosis vs Diagnosis
Advertisement

Patients want to know if they're going to be okay when they go to the doctor. But that's not the doctor's first step. They have to know what disease the patient has before they determine if the patient will be okay.

A Prefix Makes All the Difference

Prognosis and diagnosis sound similar because they share the Greek root gnosis, meaning "knowledge." However, their prefixes make their meanings and functions in the medical world quite different.

When a doctor gives you a diagnosis, they're deciding which disease you have between several possibilities. When they give you a prognosis, they're determining what the disease will do before it progresses. The key to both words is gnosis — doctors are using their knowledge to treat you properly.

Diagnosis Meaning: What Disease It Is

The noun diagnosis has a Greek origin (originally diagignōskein — "to distinguish"). While its meaning in Greek is more general, the word's Latin application relates only to the medical world when determining what disease a person has. Examples of diagnosis in a sentence include:

You may also hear the verb form of diagnosis, which is diagnose. For example:

Prognosis Meaning: What the Disease Will Do

Prognosis comes from the Greek word for "knowing beforehand" (progignōskein). It's most often used in a medical context to describe a doctor's estimation of how a disease will progress, and how favorably or unfavorably it will affect a patient's life and survival.

Examples of prognosis in a sentence include:

Though much less common than diagnose, doctors sometimes use the verb prognose to describe the act of giving someone a prognosis. For example:

Prognosis and Diagnosis Outside the Medical World

Although prognosis and diagnosis are generally used in the context of medicine, they can also be found in different contexts. Diagnosis, for example, can refer to anyone determining the cause of a problem. For example:

You can use prognosis when describing a foreseen outcome to any situation. For example:

It's not often that grammar impacts your health. However, in the case of prognosis vs. diagnosis, knowing which word identifies a disease and which word determines how the disease will affect one's life is key for navigating the recovery journey. These words are on a long list of medical terminology influenced (and adapted from) Greek and Latin vocabulary. Learn how Latin also influences the law with a quick guide to Latin words in the legal profession.