“Program” vs. “Programme”: Which Is Correct?

If you’re not yet, you better get with the program! Or is it programme? Technically, both program and programme are correct, but what you actually use depends on where you live. Why do you have to get with the program, though? Well, that’s just something you’ll have to figure out yourself, sorry. 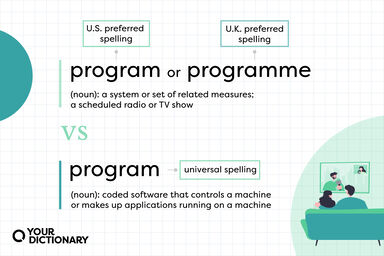 "Program" and "programme" as nouns with definitions detailed in article.
Advertisement

Which Is Correct: “Programme” or “Program”?

Both programme and program are correct. They are slightly different spellings that generally mean the same thing. However, you’re extremely unlikely to see programme in places that use American English, which favors program. On the other hand, British English users love programme.

But that’s not a set rule. Even in countries that use British English, including Canada and Australia, program is still the preferred form. Furthermore, depending on the context, even those in the U.K. may use program instead of programme.

When To Use “Programme” and “Program”

If you’re a British English user in the U.K., you’re likely using programme in most instances. The one exception is when it involves computers. When referring to apps and other computer-based systems, most people in the U.K. revert to the American English program.

If you use American English, you’ll use program in all instances.

What Do “Programme” and “Program” Mean?

Program and programme have multiple meanings.

“Program” and “Programme” in Computing

And then computers became more prominent. Even in British English, you’ll probably only see program when referring to coded software that controls a machine or makes up applications running on a machine.

Verb Forms of “Programme” and “Program”

Programme and program also come in verb forms that refer to designing a system or schedule or writing the code to a computer program.

Plural of “Programme” and “Program"

If you want to form a plural of programme or program, simply add an “S” to the end of the word. This gives you programmes and programs, both pronounced and used the same.

Other Forms of “Programme” and “Program”

Things can get a little funky when you look at the other forms of programme and program that add a suffix to the end of the word.

When programme is in its -ed or -ing form, you drop the “e” and add the suffix, programmed and programming.

When changing program into its -ed or -ing form, you have to double that “m” before adding the suffix, giving you programmed and programming. However, the alternate versions that don’t double that “m” (programed and programing) are acceptable. Most people prefer the double “m” use, especially when you consider words like framing and taming that look like they should rhyme but do not.