Prone vs. Supine: The Simple Difference

It's common for people to confuse the words prone and supine, but it's actually really easy to tell them apart. The difference between prone vs. supine is as easy as being able to tell up from down! Discover a foolproof way to always use these two terms correctly. 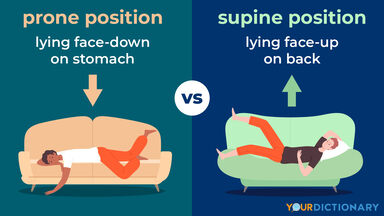 prone on stomach versus supine on back
Advertisement

The words prone and supine are adjectives used to refer to the way a person's body is positioned when lying down. The prone position is the opposite of the supine position.

An easy way to remember the difference between the prone and supine position is to match the first vowel in each word with the only vowel in the word that describes the way someone is facing when in either position.

These simple memory tips can make it easy to accurately choose between the words supine and prone to describe body position.

The words prone and supine are anatomical terms used to describe body positioning. These words are used by medical professionals, personal trainers and others who deal with or discuss body mechanics.

The word supine is only used in reference to body positioning, but prone has another meaning beyond its anatomical use. Prone also means that a person, animal or other thing is likely to behave or act a certain way.

This usage isn't likely to be confused with the word supine, as the two words don't sound alike and don't have similar meanings in this context. If a person is likely to mix up this meaning of prone with another word, it's more likely that the confusion would arise with the word prong or pronged. These terms sound similar to prone, but refer to an object that sticks out or branches off from something else.

Learning the difference between prone vs. supine as the words are used to describe body positioning is an important part of building a strong vocabulary of basic scientific terminology. Discover even more key medical vocabulary words once you have mastered the difference between these terms. From there, build on your foundational knowledge by learning the meaning of common medical suffixes. If you want to expand your vocabulary beyond a basic level, take the time to master medical abbreviations as well. Discover other positioning words that are commonly confused like stalagmite vs. stalactite.